Apple CEO Tim Cook is at the White House Summit on Cybersecurity and Consumer Protection which is occurring now, and he is expected to speak for approximately 10 minutes beginning at 11 a.m. Pacific Time, ahead of a presidential address set to take place at 11:15.

The summit is being streamed live on YouTube and can be watched below.


The White House is expected to unveil its next executive action on cybersecurity at today's summit. The event includes tech executives, academics, government officials, with several panels on topics like payment security, and improving cybersecurity practices at consumer oriented businesses.

Update: During his speech at the Summit, Apple CEO Tim Cook highlighted Apple's commitment to privacy and security, once again pointing out that Apple makes its money by selling products and services, not by selling personal data.

"Our customer's trust means everything to us," said Cook. "We spent decades working to earn that trust. Privacy and security are built into every one of our products and services." He went on to detail Apple's use of encryption across hardware and software, and its security monitoring, which goes on 24/7. "We set the industry's highest standards," he said. "And we are deeply committed to living up to them."

Apple Pay was a major focal point of the speech, and Cook described how it's far more secure than a plastic card with a magnetic stripe. He also once again pointed out that Apple does not track Apple Pay data and he announced a partnership with the federal government that will see Apple Pay available for many government-related transactions in September, such as admission into a national park. Federal cards issued to veterans and for Social Security payments will also be compatible with Apple Pay. 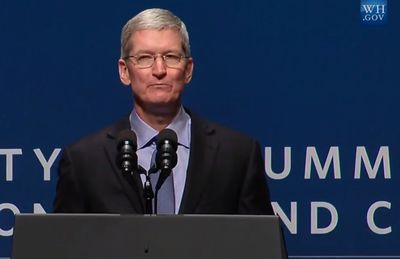 Cook also spoke on the importance of government, business, and citizens working together to provide greater privacy and security.

Security and convenience can work in harmony. This is a world of greater privacy and a world where criminals find it much more difficult to carry out their crimes. No single company or organization can accomplish this on its own. We are committed to engaging with the White House and Congress and putting things into action.

When it comes to the rights of customers and citizens, we're all talking about the same people. People have entrusted us with their most personal and precious information and we owe them nothing less than the best protections we can possibly provide by harnessing the technology at our disposal.

We must get this right. History has shown us that sacrificing our right to privacy can have dire consequences.

Cook's speech has ended but can still be viewed via YouTube at the 2:23 mark in the video.

Chatter
Does it get awkward when TC asks the Govt to stop spying? Or do they wink and nod as it's an inside joke?
Score: 5 Votes (Like | Disagree)

Even his prepared remarks are delivered in that slow uninspiring whisper that he employs at Keynotes. Very strange.

They are all working together against the rest of us who blindly buy buy buy, consume consume consume - we are too comfortable to realize what is Really going on. We vote with our buying power and we're onto a really poor path here people :D
Score: 3 Votes (Like | Disagree)

We must get this right. History has shown us that sacrificing our right to privacy can have dire consequences.


An echo of Benjamin Franklin's sentiment, perhaps?
"Those who sacrifice liberty for security deserve neither."
Score: 2 Votes (Like | Disagree)

viorelgn
Facebook and Google are all about compromising privacy and exploiting personal and private information. For them to say anything about government surveillance is truly the pot calling the kettle black. Regardless of their poor rack record however, stay silent on these matters is absolutely not the right thing to do. If you turn a blind eye youre part of the problem.
Score: 2 Votes (Like | Disagree)

Does it get awkward when TC asks the Govt to stop spying? Or do they wink and nod as it's an inside joke?


Is there any doubt that iCloud is fed directly to the NSA data centers?
Score: 2 Votes (Like | Disagree)
Read All Comments

Sunday June 26, 2022 7:36 am PDT by Joe Rossignol
iPhone 14 Pro models are widely expected to feature always-on displays that allow users to view glanceable information without having to tap to wake the screen. In the latest edition of his Power On newsletter for Bloomberg, Mark Gurman said the feature will include support for iOS 16's new Lock screen widgets for weather, fitness, and more. "Like the Apple Watch, the iPhone 14 Pro will be...
Read Full Article • 140 comments

Monday June 27, 2022 3:38 am PDT by Tim Hardwick
Polish developer Michał Gapiński has released a new and improved version of his "Tesla Android Project" which brings Apple's CarPlay experience to more Tesla vehicles than ever before. According to Gapiński, version 2022.25.1 provides "100% functional CarPlay integration for any Tesla," and comes with several new features and bug fixes. The project now supports DRM video playback so that...
Read Full Article • 127 comments