The new Apple TV launched on Friday with an all-new App Store, but early adopters were quick to realize that app discovery was limited to a single featured section and a manual search option -- unlike the App Stores on iPhone, iPad and Mac, which have several genre-based categories and top charts for apps. 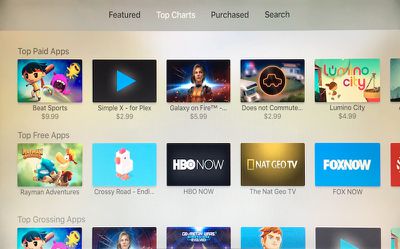 Apple has partially addressed this issue today by adding top charts to the tvOS App Store, listing the top paid apps, top free apps and top grossing apps. Confirming our previous report, games make up the majority of the top spots so far, while apps from content providers such as HBO, FOX and CBS are also popular.

Restarting your Apple TV or force closing the App Store may be required to view the new Top Charts section. The category may still be rolling out to all users at this time.

ipedro
One way to fix app discovery is for Apple to make a section for AppleTV apps on the iOS App Store accessible from an iPhone or iPad. Either buy the app there and have it appear on your Apple TV or you could add it to a wish list that would be visible for later downloading on the AppleTV of your choice.
Score: 14 Votes (Like | Disagree)

coolfactor
How are people finding the readability of the new Apple TV? Is it an improvement over the previous generation? My elderly mother still needs to move closer to her 55" screen just to read some of the text, and this new one seems to have even poorer contrast. White text over grey? Who at Apple thought that was a good idea? Did they do extensive usability testing?

big question is...are there any games on the store which are worth a darn yet? The beats game looks like some dumb Wii game. I'd like some games with more depth or strategy.

Day One and you're expressing first-world-problem disappointment? Let me repeat: Day One.

Better yet... go design a game! Contribute a solution to the "problem". :)
Score: 8 Votes (Like | Disagree)

I listened to the Upgrade podcast today and the host mentioned that Apple's staff told him there won't be an update to the Remote app to support the ATV4. I guess Apple really wants you to use your Siri Remote.
Score: 8 Votes (Like | Disagree)

ButteryScrollin
They need to allow games that only work with an MFi controller, Siri remote sucks as a d-pad.
Timmy plz.
Score: 6 Votes (Like | Disagree)

oneMadRssn
I find it hard to believe that Netflix isn't in the top 10 free apps...
Score: 6 Votes (Like | Disagree)

Jeremy1026
Moving in the right direction.
Score: 4 Votes (Like | Disagree)
Read All Comments