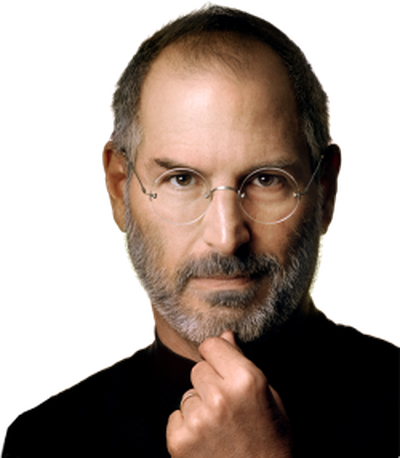 A video obtained exclusively by ABC News today aims to showcase the "softer side" of Steve Jobs, with the former Apple CEO addressing an assembly of Apple employees the day before the release of the original iPhone in 2007.

During the brief clips shared by ABC News, Jobs urges the company's employees to go in to an Apple Store and "just give one of the Apple retail store employees a hug," discusses his theory of corporate management, and debunks the history to his famous ripped jeans.

The footage was shared with Apple's employees yesterday to mark the fourth anniversary of Jobs' death on October 5, 2011. A handful of well-known Apple executives put together some personal essays in memory of the Apple co-founder, including current Apple CEO Tim Cook, calling him "brilliant" and with "a great sense of humor."


A lot of Jobs' past has been resurfacing recently alongside the release of a handful of films chronicling his life, including Steve Jobs: The Man in the Machine and the upcoming Aaron Sorkin-penned Steve Jobs movie. A few of Jobs' supporters aren't backing many of these interpretations of him, including his widow Laurene Powell Jobs, who tried to cease production on the Sorkin script multiple times.
Tag: Steve Jobs
49 comments

UnfetteredMind
Be nice if they just showed the video instead of talking over it, doing constant cuts, wipes, etc.
Score: 10 Votes (Like | Disagree)

It's strange as I was thinking about this the other day.

I was watching that 'internal' video on YouTube where Steve introduced the Think different campaign to employees, and I was wondering, I bet there's tons of footage filmed from internal meetings that very few people have ever seen before.

I think, over time, as it becomes more acceptable (from a secrecy standpoint), they should release more of these videos.

There is no way, if he really was such a big butthead, that he was able to achieve so much.

ryansimmons323
It's strange as I was thinking about this the other day.

I was watching that 'internal' video on YouTube where Steve introduced the Think different campaign to employees, and I was wondering, I bet there's tons of footage filmed from internal meetings that very few people have ever seen before.

I think, over time, as it becomes more acceptable (from a secrecy standpoint), they should release more of these videos.
Score: 4 Votes (Like | Disagree)
Read All Comments

Wednesday August 12, 2020 7:55 am PDT by Joe Rossignol
China will no longer be the world's manufacturing epicenter going forward, according to Apple's largest supply chain partner Foxconn, which has been gradually expanding its operations in other countries amid the U.S.-China trade war. "No matter if it's India, Southeast Asia or the Americas, there will be a manufacturing ecosystem in each," said Foxconn chairman Young Liu, according to Bloombe...
Read Full Article • 115 comments

Wednesday August 12, 2020 4:31 pm PDT by Juli Clover
Apple last month confirmed that this year's iPhone 12 models will launch outside of their normal September timeframe and will be "available a few weeks later," which has led to speculation about when an event might be held. Leaker Jon Prosser, who sometimes shares accurate knowledge of Apple's plans, today said that Apple will hold its iPhone 12 event during the week of October 12, with...
Read Full Article • 194 comments

Saturday August 8, 2020 11:09 am PDT by Hartley Charlton
Apple is taking legal action against the developers of the app "Prepear" due to its logo, according to iPhone in Canada. Prepear is an app that helps users discover recipes, plan meals, make lists, and arrange grocery deliveries. The app is a spinoff of "Super Healthy Kids," and the founders claim that they are facing litigation from Apple. Apple reportedly takes issue with Prepear's logo, ...
Read Full Article • 547 comments

Thursday August 13, 2020 3:41 am PDT by Hartley Charlton
Apple will launch a new range of subscription service bundles called "Apple One" as soon as October, according to a new report by Bloomberg's Mark Gurman. The series of bundles would allow customers to subscribe to several Apple digital services together. This is expected to result in a lower monthly price than when the services are subscribed to individually. Bloomberg reports that the...
Read Full Article • 180 comments

Wednesday August 12, 2020 1:31 pm PDT by Juli Clover
Apple today released iOS and iPadOS 13.6.1, minor updates that come a month after the release of the iOS 13.6 update with Car Keys and Audio Apple News+ stories. The iOS and ‌iPadOS‌ 13.6.1 updates are available on all eligible devices over-the-air in the Settings app. To access the updates, go to Settings > General > Software Update. iOS 13.6.1 addresses an issue that could cause...
Read Full Article • 72 comments

Thursday August 13, 2020 11:58 am PDT by Juli Clover
Just hours after Epic Games introduced a new direct payment option for Fortnite that skirts Apple's in-app purchase rules, Apple has pulled the Fortnite app from the App Store. Fortnite is no longer available for download on the iPhone or the iPad, and Apple provided a statement to MacRumors on Fortnite's removal:Today, Epic Games took the unfortunate step of violating the App Store...
Read Full Article • 812 comments

Tuesday August 11, 2020 2:11 pm PDT by Juli Clover
Logitech recently debuted the Folio Touch, a keyboard and trackpad case designed for the 11-inch iPad Pro that serves as an alternative to the Magic Keyboard. In our latest YouTube video, we compare the $160 Folio Touch to Apple's $300 Magic Keyboard to see which is better. Subscribe to the MacRumors YouTube channel for more videos. Logitech is selling the Folio Touch for $160, while Apple's...
Read Full Article • 74 comments

Wednesday August 12, 2020 1:20 pm PDT by Juli Clover
Apple today released a supplemental update for macOS Catalina 10.15.6, with the update coming a month after the original launch of macOS Catalina 10.15.6. The ‌‌macOS Catalina‌‌ 10.15.6 Supplemental Update can be downloaded from the Mac App Store using the Update feature in the System Preferences app. According to Apple's release notes, the update fixes a problem that could cause...
Read Full Article • 107 comments