Ahead of the September 25 launch of the iPhone 6s and 6s Plus, the new devices are beginning to show up in shipping warehouses as Apple prepares to deliver them to pre-order customers around the world. With more people having access to the devices before launch, there are bound to be a few image leaks, and today, some photos of both the outer packaging of the iPhone 6s and the rose gold iPhone have surfaced.

Spanish site iPhoneros [Google Translate] says its photos of the packaging came from a source in China. In one of the images, the packaging for all four iPhone 6s colors is depicted, each with a different siamese fighting fish, matching previous leaked packaging photos. The side of the box has the iPhone 6s name, and there's an Apple logo at the top. 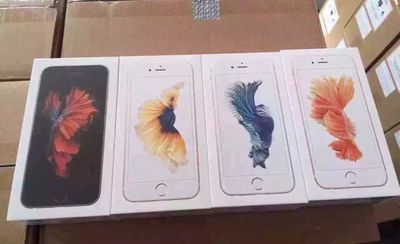 Chinese site Feng [Google Translate] has also shared a series of photos depicting both the packaging and the Rose Gold iPhone 6s. Of note on the Rose Gold iPhone is the small "S" on the back of the device, a marker that has not been seen on previous S generation phones. This was clearly depicted in press images of the device taken at the September 9 media event, but may have gone unnoticed by some.

With the S identifier at the back of the phone, it will be easier to distinguish one of the new iPhone 6s and 6s Plus devices from the iPhone 6 and the iPhone 6 Plus.

Apple's iPhone 6s and 6s Plus will be available beginning on September 25, and some customers who pre-ordered have already begun having their cards charged and are seeing their order statuses shift from "Processing" to "Preparing for shipment." Earlier this week, order status changes were limited to customers outside of the U.S., but in the last day, even customers in the United States have begun seeing some movement.

sniffies
Too many white models. We need more diversity.
Score: 57 Votes (Like | Disagree)

bahndoos
THIS. What rose gold should look like, in beautiful black.
(from https://forums.macrumors.com/threads/rose-gold-iphone-6s-photoshop.1882804/)

ricktat
Please put my phone back in the box!
Score: 24 Votes (Like | Disagree)

trekkie604
Yikes, that color is ugly.
Score: 20 Votes (Like | Disagree)
Read All Comments