A new photo obtained by cnBeta [Google Translate] (via Mac Otakara [Google Translate]) allegedly shows off what appears to be the packaging of the upcoming iPhone 6s Plus. The photo depicts a standard white iPhone box, similar to what Apple has used as packaging for previous phones. 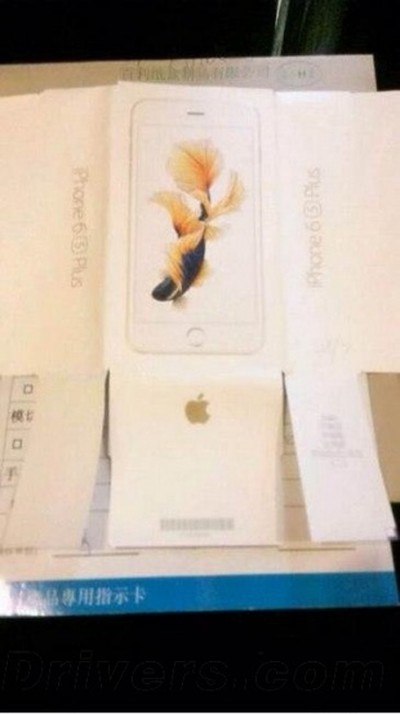 The box is unfolded and has what appears to be a gold iPhone 6s Plus on the front, a gold Apple logo on the bottom and "iPhone 6s Plus" written on the side. The "S" is within a small square, as is standard on iPhone "S" packaging. The box also shows off what looks to be a brand new wallpaper featuring a black and gold fish or flower.

However, it's unclear how authentic the photos of the iPhone 6s Plus packaging are. The material of the box appears to be a thinner material than current iPhone packaging and displays an unfamiliar wallpaper that has not appeared in any iOS 9 betas thus far.

Apple is expected to announce both the iPhone 6s and iPhone 6s Plus at a September 9 event. The Cupertino company is also expected to finally unveil its new Apple TV with a new touch-based remote and full App Store. New rumors indicate the event could be held at the Bill Graham Civic Auditorium in San Francisco.

electorate
Why don't they just improve the battery efficiency in the processor, AND leave the current size battery in? Make the back of the phone flush with the camera lens in order to have more room for the battery. You'd be able to lay it on a table with no wobbling, have more battery life, and probably easier to hold phone with the added bit of thickness.
Score: 31 Votes (Like | Disagree)

iBlazed
Oh how cliché. You'd think these people would have upgraded their iPhone 3G by now so they could leak clearer photos.
Score: 26 Votes (Like | Disagree)

viperGTS
Really hope the smaller battery rumor turns out to be false.
Score: 25 Votes (Like | Disagree)

Now why would it have a smaller battery? Why not keep the same battery, that way we have even better battery life?

Because this is Apple. By putting a smaller battery in it, they already got you wanting to upgrade your new phone to next year's model. Planned obsolescence 101.
Score: 23 Votes (Like | Disagree)

akfgpuppet
Now why would it have a smaller battery? Why not keep the same battery, that way we have even better battery life?
Score: 21 Votes (Like | Disagree)

cariacou
According to Google Image search,
that fish is nowhere to be found on the internet.
exclusive picture.. that gives pretty strong credibility to this box being the real one
Score: 17 Votes (Like | Disagree)
Read All Comments