First Trailer for 'Steve Jobs: The Man in the Machine' Documentary Released

Magnolia Pictures has shared the first trailer and movie poster for Steve Jobs: The Man in the Machine with Mashable, just over four months after the film premiered at SXSW 2015 in Austin, Texas. The upcoming documentary, directed by Oscar-winning filmmaker Alex Gibney, portrays Jobs as both a tech visionary and unapologetic leader throughout his career at Apple.


Apple senior executive Eddy Cue expressed disappointment in the documentary following its debut, describing the film on Twitter as "an inaccurate and mean-spirited view of my friend" and "not a reflection of the Steve I knew." Cue added that the best portrayal of Jobs is in the book Becoming Steve Jobs by Brent Schlender and Rick Tetzeli, which he describes as "well done and first to get it right."

Very disappointed in SJ:Man in the Machine. An inaccurate and mean-spirited view of my friend. It's not a reflection of the Steve I knew. — Eddy Cue (@cue) March 16, 2015

Universal previously released the full-length trailer for its aptly named Steve Jobs movie, starring Michael Fassbender, Seth Rogen, Kate Winslet and Jeff Daniels, earlier this month. The trailer mainly consists of a single shot of Fassbender as Jobs, with cast voiceovers providing snippets and teases of conversations regarding Jobs' true legacy at Apple, which he co-founded with Steve Wozniak and Ronald Wayne in 1974.

Steve Jobs: The Man in the Machine opens in select theaters on September 4.

avanpelt
That trailer looks pretty accurate to me based on what I've read in the past. Let's face it, Cue and others on the Executive Team will likely always look at Steve through rose-colored glasses. That's only natural. To be in the position Jobs was in with the amount of influence he had, he was bound to have plenty of enemies and people he pissed off. And, like most people who have positions similar to the one he had, he didn't give a damn about those people.
Score: 20 Votes (Like | Disagree)

Anybody else want there to be a movie about Woz? I mean, yes Steve Jobs was very important to Apple, but so was Steve Wozniak. 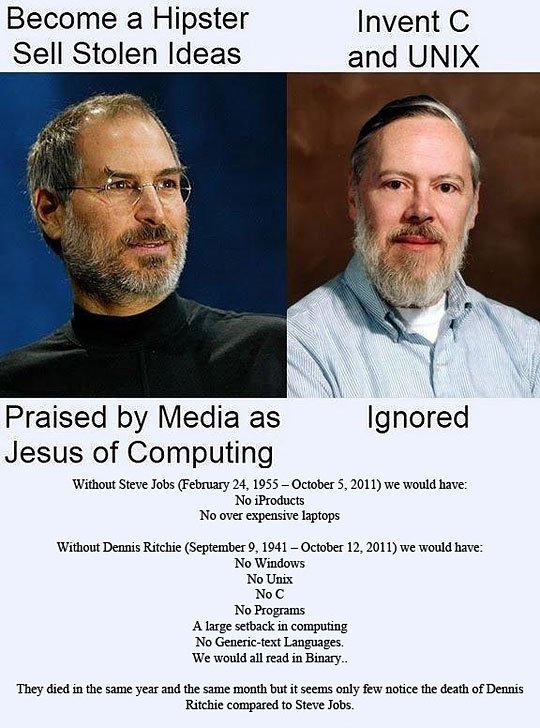 hlfway2anywhere
I don't think this looks mean-spirited at all.
Score: 10 Votes (Like | Disagree)

I never remember Apple in the UK, but I see the price at which they launched and laugh, no one would have paid that as a consumer. We just had all these cheap stuff you hooked up to your TV and cost £100, not £1400....

First I heard of Apple was those terrible PCs they made in the late 90s, they were a laughing stock and all us Windows users were disgusted by them. Wasn't until the iPod that Apple became a thing and Macs have only recently started to become popular thanx to the iPhone and iPad.

That's funny because all I remember are us (mostly friends and family) Apple users laughing at Windows users because no one ever wanted to use PC (even PC owners) but they had to for work or because they only wanted to spend $1000 for a spreadsheet PC or $500 for an email PC. Sure the PC ran more software and costs a little less but between all the viruses, Windows launch failures and commoditizing of the PC market, we were happy to pay a little more for Macs and iPods, etc. I guess not much has changed from where I stand.
Score: 7 Votes (Like | Disagree)

Saucesome2000
I don't understand why him being an ******* sometimes is perceived to be a bad thing. Sometimes it takes a$$holes to get things done in this world. This man changed the world multiple times in his lifetime and he died early. After reading Isaacson's book, I became a bigger fan than I already was. Outside of screwing Kotke out of those shares, his day to day work ethic was got things done and every single person reading this article would have a different life if it wasn't for Steve's "bad attitude".
Score: 6 Votes (Like | Disagree)
Read All Comments

Tuesday April 20, 2021 10:08 am PDT by Joe Rossignol
Apple today announced that the iPhone 12 and iPhone 12 mini will be available in a new purple color starting April 30, with pre-orders starting this Friday. Apple is also releasing a new MagSafe Leather Case and Leather Sleeve in Deep Violet, a Silicone Case in Capri Blue, Pistachio, Cantaloupe, or Amethyst, and a Leather Wallet in Arizona, all available to order beginning today. iPhone...
Read Full Article • 63 comments

Tuesday April 20, 2021 10:10 am PDT by Tim Hardwick
Apple today announced AirTag, a Tile-like Bluetooth tracking device that's designed to be attached to items like keys and wallets for tracking purposes, letting you find them right in the Find My app. AirTags are accessories for attaching to backpacks, luggage, and other items. Any U1 device like the iPhone 12 can be used for precision finding to guide you right to the item you're looking...
Read Full Article • 212 comments

Tuesday April 20, 2021 10:40 am PDT by Joe Rossignol
Apple today announced the next-generation iPad Pro with the same M1 chip found in the latest Macs, Thunderbolt and USB4 support, 5G connectivity on cellular models with mmWave support in the United States, and more. With an 8-core CPU and 8-core GPU, Apple says the M1 chip in the new iPad Pro provides up to 50% faster performance and up to 40% faster graphics compared to the A12Z Bionic chip ...
Read Full Article • 262 comments