Tuesday July 14, 2015 7:40 am PDT by Joe Rossignol
Apple's discussions with ABC, CBS, NBC and Fox for its much-rumored streaming TV service are gaining momentum, according to the New York Post. The report claims that Apple has enlisted networks to negotiate with local TV stations on their behalf, and the networks are said to be close to securing those rights with affiliate groups such as Tribune and Sinclair. 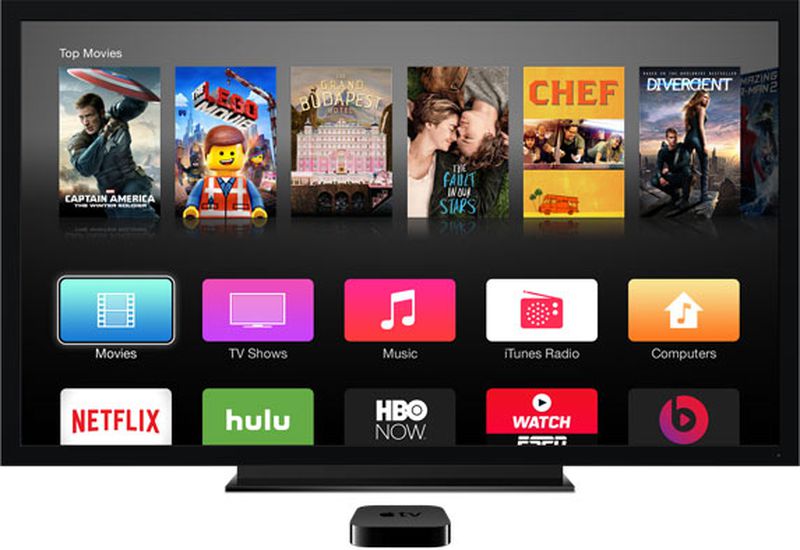 Networks are reportedly telling affiliates that they will be able to share the revenue generated from Apple's streaming TV service if they offer their feeds on the platform. The inclusion of local TV stations is important for the success of Apple's cable-cutter service, expected to launch in the fall for devices including iPhone, iPad and Apple TV. The service is speculated to cost between $10 and $40 per month.

At CBS, executives are talking to affiliates about conducting Apple negotiations on their behalf, one TV source confirmed.

At Fox, the network “has the ability to negotiate with Apple [for affiliates], or it will have it very soon,” a second executive added.

Disney and CBS will likely be among the first networks to reach a deal with Apple for its à-la-carte streaming TV service, according to the report, although some sticking points remain in the negotiations. Cable channels such as Discovery and ESPN are also expected to be included in the subscription-based service, which is rumored to include a skinny bundle of around 25 channels.

Please, just add a home button to the remote. This is all I ask.


You can press and hold the "menu" button to get to the home screen right away. It's very easy.
Rating: 18 Votes


Seems like it, and it's super frustrating to have the Apple TV hardware release delayed just because of some streaming agreements, none of which will be available in Finland anyway.
Rating: 6 Votes

Kar98
If only there was a way to suck local channels right out of the air, like with some sort of "aerial" or "antenna".
Rating: 5 Votes

840quadra
Oddly enough, getting local news on Apple TV would be great. I can't quite reach HD-TV signal with my current antenna, due to the distance to the tower. If this is included, I would be more apt to join into the method. I have been totally fine just using iTunes, Netflix, YouTube for my entertainment needs, yet, still want local (video) news.
Rating: 4 Votes

Apple ABSOLUTELY MUST make this BETTER than cable! NO COMMERCIALS/ADS! PERIOD. ...Netflix is without commercials...and THAT is why it is the most popular subscription service!!

Many reading this may not remember or be old enough to know, when Cable TV started, you paid for TV that was without commercials, and that is what we need to go back to...pay for TV, no commercials...free TV, have to put up with commercials. End of discussion.


It kills me that people don't notice how they somehow slipped in commercials over the years. Yes that was the premise of cable. You pay for programming without commercials. Originally it was only the over the air content that had commercials. I have no idea how they got away with adding in advertisements. It's why I don't have cable. I'm not getting what I pay for.
Rating: 3 Votes

furi0usbee
This all sounds great, but are we just going from one expensive bundle to a less expensive bundle? Still a bundle of channels we may not want. This doesn't seem like great strides to me.
Rating: 3 Votes

That's what I don't get about these skinny packages. It's still a bundle of channels just fewer channels. I'd rather get more channels and know I'm getting the ones I want than fewer and am missing ones I frequently watch.


I wonder why we in 2015 are discussing channels at all! Only news and sports require live streaming, the rest are just programs
Rating: 3 Votes


Not necessarily to the consumers. But, it's extremely important to the broadcasters that operate the local channels. Every person they lose to a streaming service is a set of eyeballs they can't sell to their advertisers, and it reduces their revenue.

The National Association of Broadcasters is very powerful on Capitol Hill. It's the reason that DirecTV and Dish Network have to dedicate a lot of bandwidth to re-broadcast local TV stations to customers that are within the broadcasters reception area. They can't just broadcast a network feed directly from CBS/ABC/FOX/NBC.

I always thought this was a huge waste of bandwidth: DirecTV and Dish should have just negotiated a larger payment to the local broadcaster for every subscriber, and transmit the network feed. They could have offset some of the cost by selling commercials in the spots normally reserved for local commercials. And, they would have been able to deliver a high-bandwidth feed, instead of the compressed crap they deliver now. Of course, subscribers wouldn't get the local news, but these days I don't think that's a real problem.

Apple TV has the same problem: they can't stream CBS/ABC/FOX/NBC programmers to someone that lives in a broadcaster's footprint. They have to stream the local broadcaster's signal, unless they are able to negotiate a payment like I proposed above.
Rating: 3 Votes

Isn't the whole point of "cable cutting" to pay $0, unless I'm wrong, but charging people for a service kind of defeats that purpose. You'd be better off not cutting your cable in this case. Besides, Apple doesn't exactly need the $$$,$$$,$$$,$$$.00 (money).

No, it's not to pay $0, it's to pay less. Content creators aren't giving this stuff away. Cable cutting will also allow for the content you want, not the 100 channels you've never heard of and won't watch.
Rating: 3 Votes

I think you might not be seeing the bigger picture: Apple TV would require an additional component (receiver and antenna) to receive local broadcasts. Setting aside the cost of the receiver, the logistical issues of connecting an antenna is insurmountable for some.

And what I think many are missing: The Apple TV service doesn't necessarily require an Apple TV device. Why not stream to an iPad, a Mac, or even an iPhone? If Apple is able to negotiate licenses for the content, they could leverage that into a competitor with Netflix, Hulu, etc. that can be viewed anywhere.


All TVs have a receiver (also Federal Law, that you love to cite :-P ). See my comment a few posts above, antennas are surely a bit of a hassle, but about as much of a hassle as setting up a table lamp for the majority of US households.

I am not saying AppleTV should have a receiver - it probably shouldn't. I'm saying Apple shouldn't worry about local channels - the rights cost a ton relative to very little benefit.

It would be like delaying the launch of the new iPhone because Apple couldn't negotiate a deal with some blogs to republish their blog posts on Apple News. It would be a nice feature, but shouldn't be a showstopper and Apple shouldn't invest more than a small token amount of time and money into it.
Rating: 3 Votes