Apple has announced that its first retail store in Queens, New York, located at the Queens Center shopping mall in the Elmhurst neighborhood, will have its grand opening on Saturday, July 11 at 10:00 AM local time. The new Apple Store at 90-15 Queens Boulevard will be open between 10:00 AM and 9:30 PM on Monday-Saturday and between 11:00 AM and 8:00 PM on Sunday. 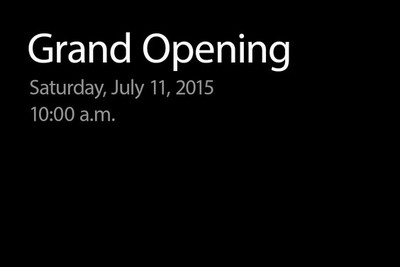 Apple's first retail store in Queens will mark its eighth location in New York City, with six existing locations in Manhattan and one in Staten Island. Apple is also planning to open its first retail store in Brooklyn, having signed a long-term lease for a 20,000 square-foot building at 247 Bedford Avenue in Williamsburg, although those plans are running behind schedule after the store missed its original April 2015 grand opening target.

I actually knew that (my kids live there). I'm just venting, cause if you live where Tim Cook grew up, you have to drive 2 hours to NEW ORLEANS to get to the nearest Apple store. That's two states away.

You could go to the single Apple store in the state, but that's over 4 hours away.

Maybe Apple retail team did thorough analysis and decided Alabama is not ready yet? Retail is a complex business, they can't just open a store simply because a CEO grew up in that area, wouldn't be fair to shareholders.
Score: 5 Votes (Like | Disagree)

DVNIEL
"But where in New York can one find a woman with grace elegance, taste and culture. A woman suitable for a king?"

Ok, Mr. Cook. Enough is enough. That makes how many Apple stores in the 5 boroughs alone? And there is a single Apple store in your home state of Alabama? <sigh>

What about Long Island? Huntington or Smithtown?

Wednesday May 12, 2021 10:03 am PDT by Juli Clover
Apple's M1 iMacs are set to start delivering to customers next week, and ahead of the official launch day, benchmarks for the machines have been showing up on Geekbench, likely from reviewers who are testing them. It will come as no surprise that M1 iMac benchmarks are right on par with benchmarks for the M1 MacBook Pro, MacBook Air, and Mac mini, coming in with an average single-core score...
Read Full Article • 256 comments

Wednesday May 12, 2021 3:54 pm PDT by Juli Clover
In the ongoing legal battle between Apple and Epic Games, the two companies are this week calling up their expert witnesses to argue their points before Judge Yvonne Gonzalez Rogers, who will make a decision in the case after a three week trial. Expert testimony is not as exciting as some of the leaked App Store documents that were highlighted last week, especially as much of what's being...
Read Full Article • 246 comments