Apple may finally be opening its first Apple Store location in Brooklyn, according to The New York Post. Information gained from brokerage community sources reveals that Apple has signed a long-term lease for a 20,000 square-foot store at 247 Bedford Avenue at the corner of North 3rd Street in Williamsburg, Brooklyn. 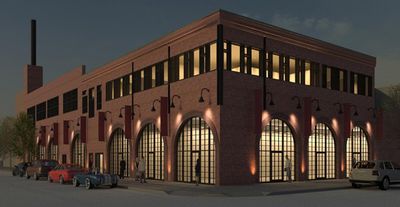 Rendering of renovated 247 Bedford prior to Apple commitment (via The Real Deal)
The New York Post states that the new Apple Store will be a two-story brick structure and "is getting a whole new look, featuring dramatic, arched windows." The project will reportedly be completed in April of 2015. There was no confirmation yet on when Apple will move in to begin renovation, or how much it will pay for the location.

Apple already has a handful of retail stores in New York City, including Fifth Avenue, SoHo, Upper West Side, Grand Central, and West 14th Street. Rumors of a Brooklyn/Williamsburg store have circulated for years, with various reports citing a number of possible locations.

NightFox
I saw the photo and thought it was another level for Monument Valley
Score: 3 Votes (Like | Disagree)

The hipster mother ship is landing.


I wouldn't say that. Creative types left Williamsburg years ago. It's yuppie central now, hence the new Apple store. It finally makes sense for them to do it.
Score: 3 Votes (Like | Disagree)

StuddedLeather
This news literally made my DAY (especially in all of this rain)! To have an Apple Store in my home borough has me so excited. Yeah I know some people only have one Apple Store in their whole city, but New York is an exception to that rule.

I'm not surprised that Williamsburg is the first location for Brooklyn (Bedford Ave is literally packed with tourist/locals all the time). A Williamsburg location was evident.

Next should be near Barclays Center/BAM District. I believe there were talks/rumors about 286 Ashland Place. Brooklyns 'Lincoln Center' if you will.

About damn time. Although I would have preferred downtown Brooklyn, not Hipsterville.


i guess a short few-year period of jean-jacket wearing dudes on tall bikes with mustaches will ruin an area's character for decades..? when was the last time you were in williamsburg, honestly? it's all orthodox jews, dutch tourists and wealthy new families. the quote-unquote 'hipsters' (who aren't even recognizable as 'that type' anymore) are all in Bushwick, Ridgewood, and Harlem. they scattered, and realized how embarrassed they were to be identified as cultural icons.

the hipsters are all dead. long live the normals.
Score: 2 Votes (Like | Disagree)

A new commercial building is under construction at 66 Boerum (by Atlantic Ave). There was a rumor a while back about a future Apple store at that location.


Yes I remember seeing that story as well and the renderings did look like an Apple Store could easily move in. I think we've waited for this moment for a while that every developer was attempting to cater to Apple as well haha. Though I knew Williamsburg was going to be first. I also wouldnt be surprised if they'd open somewhere in Dumbo. Empire Stores on the waterfront perhaps? It's enough time to get them (Apple) onboard there as well.

Hopefully a Downtown store will be in the works sooner than later (City Point would be good since we'd also have a stand alone Williamsburg store.)

I'm just happy with a 20,000 Apple Store anywhere in my borough!
Score: 1 Votes (Like | Disagree)
Read All Comments