For the past several months, Apple-leased Dodge Caravans with equipment-laden roofs have been spotted driving around the United States. While early speculation suggested the vans could be Apple's first attempt at developing a self-driving vehicle, it quickly became clear that the vans were being used for mapping purposes.

The Dodge Caravans are all outfitted with an array of LIDAR cameras, much like the vehicles that Google uses to capture images for its Street View mapping feature, so it is no surprise that a report shared today by 9to5Mac suggests the images and data from the vans will be used for future improvements to Apple's Maps feature. Here at MacRumors, we have been aggregating Apple van sightings to give a clear picture of the areas where Apple is currently focusing its attention. 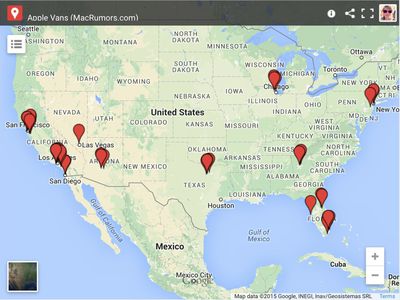 Click on the map to go to a full interactive view complete with pictures from each sighting
Apple has worked tirelessly to improve the Maps app since its 2012 launch, fulfilling Tim Cook's promise that Apple would work "non-stop" until Maps met its "incredibly high standard." The next step in Maps' evolution is the gathering of in-house data to reduce reliance on third-party companies like TomTom, which has provided data for Apple Maps since it launched. Just this month, TomTom and Apple renewed their mapping contract, so Apple's shift towards its own data system may still be several years off.

Using in-house data has the potential to significantly improve the Maps experience. Apple will not have to rely on third-party information that's potentially riddled with errors and inaccuracies, and the company will also be able to implement changes and fixes more quickly.

In the future, the imagery captured by the vans may be used by Apple to create its own 3D street level viewing experience to complement its existing Flyover feature. Flyover is designed to let Maps users explore landmarks and major cities around the world through an aerial view. A street level addition to Flyover could perhaps be useful in day-to-day life to get a look at nearby locations, but it's possible Apple has its eye on something grander, perhaps giving Maps users a way to explore exotic locations on a more granular level.

Apple is also reportedly using its fleet of Dodge Caravans to capture images of storefronts and businesses, and this data may be of more immediate use to the company. Imagery of stores, businesses, and restaurants may be incorporated into an upcoming iOS 9 revamp to Apple's Points of Interest system, replacing photographs pulled in from third-party sources like Yelp.

We may see the first fruits of Apple's new mapping project as soon as June 8, when Apple unveils iOS 9 at WWDC and provides it to developers for testing purposes. iOS 9 is rumored to have a few other upgrades in addition to a new Points of Interest system, including transit routing information in a limited number of cities.

Apple will not have to rely on third-party information that's potentially riddled with errors and inaccuracies,


Instead they can rely on their own information that's riddled with errors and inaccuracies... :rolleyes:
Score: 26 Votes (Like | Disagree)

AngerDanger
Hopefully, they won't be using Apple Maps for navigation. 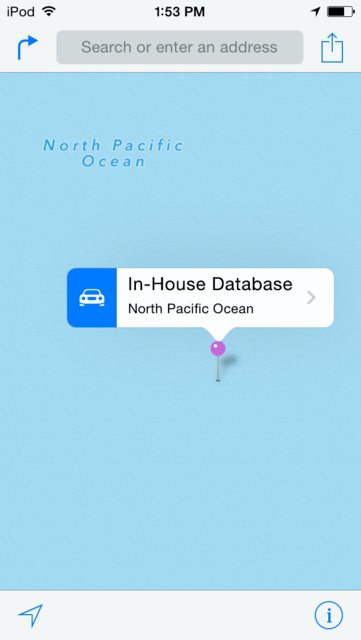 I wish Apple let us choose Google Maps as our default mapping application. I'd love to ask Siri for directions but she can never find what I'm looking for or her directions are wrong.

I'm in Canada so I don't get the reliability of US Apple Maps.


I'm in the USA and don't get reliable Apple Maps
Score: 20 Votes (Like | Disagree)

Peace
Give Apple a break.

Google's main function for many years has been searching and maps.
Of course they're better at it. That's all they do "well".
Score: 19 Votes (Like | Disagree)

I'm in the USA and don't get reliable Apple Maps


I do. Been using Apple maps from the early beta days without any issues.
Score: 18 Votes (Like | Disagree)

tennisproha
I've said time and time again here that Flyover has so much more potential than Street View solely because of the fact that its free-axis. This allows for much more functionality and efficiency.

Everyone on here over exaggerates Maps shortcomings so massively lol. Pretty funny.

All aboard the Apple Maps hate bandwagon. :rolleyes:
Score: 18 Votes (Like | Disagree)
Read All Comments