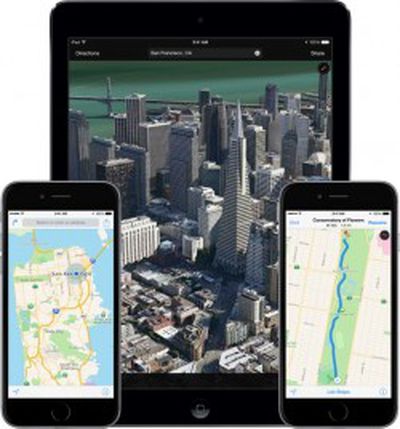 Apple has been working on adding mass transit routing information to its Maps application for several years, and while the feature appears to be ready to debut as part of iOS 9, it could be limited in scope at launch. The transit service may initially be available only in a small number of cities across the United States, Canada, Europe, and China when iOS 9 is released to the public, according to sources that spoke to 9to5Mac.

San Francisco and New York are said to be two of the locations in the United States where transit directions will be available. Both major cities are known for their public transportation options. In Canada, Toronto will likely gain transit routing options in the Maps app, as will London, Paris, and Berlin in Europe. Cities in China will also be included in the initial launch.

Apple is planning to expand access to transit information to additional cities following the fall launch of iOS 9, and cities that the company is hoping to add support for in the near future include Boston, Massachusetts and Tokyo, Japan, among others. Apple will likely work quickly to expand the feature even further across the rest of 2015 and into 2016.

Mass transit routing options have been missing from Maps since 2012, when Apple's native mapping system first replaced Google Maps in iOS 6. Transit directions were initially expected as part of iOS 8, and hints of transit options were indeed found in iOS 8 documentation, but organizational issues and staff shortages allegedly delayed the feature's release.

Apple's acquired many mapping-related companies since it introduced its Maps app, including transit apps HopStop and Embark, and in recent years, the company has also been expanding its in-house routing team as it furthers its work on the transit feature.

iOS 9, with the new Maps transit feature, is expected to be introduced at Apple's Worldwide Developers Conference on June 8.

luckydcxx
why is everything Apple does ... "not ready" or "delayed" or "production problems" or "supply constraints"

clukas
This is slowly getting quite annoying. Here in the UK we pay a premium for our apple products compared to US and some EU prices, and we don't always get all the features we pay for?
Score: 19 Votes (Like | Disagree)

sampaul
So you're telling me that Apple, which is worth $700 billion, with probably billions in cash reserves, cannot get transit into their maps for the entire world? I mean why just selected cities? I mean buy a company whose apps are already doing transit mapping and implement them into Apple Maps. How hard can that be? They could have bought a few mapping companies with the amount of money they spent on Beats.
Score: 19 Votes (Like | Disagree)

576316
Totally sick of Apple releasing new software features which are only available in the US and/or very select areas. They're a huge international brand, they just shouldn't release these features until they can do a much wider launch. Still no sign of Apple Pay in Europe or anywhere else. Don't get me started on iTunes Radio!
Score: 18 Votes (Like | Disagree)