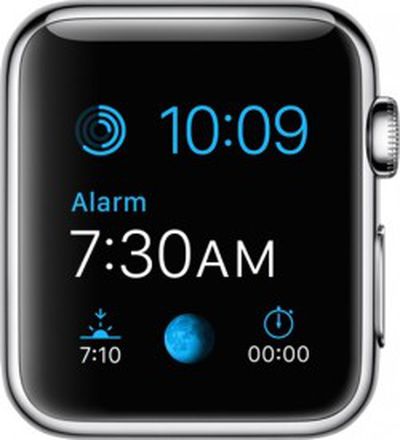 Ahead of next month's Worldwide Developers Conference, Apple is laying the groundwork for future software and hardware updates for both the Apple Watch and Apple TV, according to a new report from 9to5Mac.

Timing for some of the new features remains unclear, but the report claims Apple is working on a "Find My Watch" implementation that could be paired with a "Smart Leashing" feature that would remind Apple Watch users if they appear to have accidentally left their iPhones behind.

First, Apple has been working on a feature dubbed “Find my Watch” for the Apple Watch, which as the name implies will allow a user to track a Watch’s location, as well as lock or remotely wipe it if it is lost or stolen. [...]

Given the Apple Watch’s reliance on an iPhone, Apple plans to implement Find my Watch via what’s currently known inside the company as “Smart Leashing.” According to a source, the Watch will use its wireless signal to establish its location relative to the iPhone, and will optionally be able to notify a user if the iPhone is accidentally left behind.

The news comes following concerns over the lack of any sort of Activation Lock functionality for the Apple Watch, but the new features may require new hardware to support them, pushing their launch off until the release of the second-generation Apple Watch.

Apple is also reportedly working on support for third-party watch face complications for the Apple Watch, which would, for example, allow users to see at a glance if they have unread Twitter mentions. Additional software and hardware work is focused on filling out health and fitness functionality for the Apple Watch, including additional sensors that were rumored but did not make it into the first version of the device.

On the Apple TV front, sources claim Apple's developer tools that will allow developers to build third-party apps for the next-generation Apple TV will be known as "TVKit", with the new hardware and tools expected to debut at next month's Worldwide Developers Conference. The Apple Watch appears set to serve as a key method for controlling the new box, which will also support Apple's rumored live streaming television service, although recent rumors have suggested that piece of the overall package may debut several months later than the hardware.

Apple's WWDC keynote is expected to see a significant number of announcements, including the new developer tools for Apple TV apps and native Apple Watch apps, as well as iOS 9 and OS X 10.11. As was the case last year, hardware announcements may be slim or absent entirely, particularly with updated 15-inch Retina MacBook Pro and 27-inch iMac models expected this week.

markfc
Love this time of year...exciting times ahead.
Score: 25 Votes (Like | Disagree)

ButteryScrollin
WWDC is going to be jam packed.
Score: 19 Votes (Like | Disagree)

I don't wish to sound overly negative, but I hope Apple spends as little as possible on Siri or abandons it. It's hopeless. Voice is a dead-end that will only ever be useful for the blind. It's one of the big minuses of the Apple Watch, along with no GPS and a reliance on Bluetooth. I feel the same about Handoff.

What I would like is for Apple to stop my iPad Air 2 and iPhone 5 from rebooting daily and to fix the myriad bugs that should have been fixed years ago. Bring a proper sepia mode to both Yosemite and iOS, allow font sizes to be increased universallyespecially on the App Store, the Mac App Store, the iTunes Store and iBooks; those app descriptions are tiny. Allow more than five photos for app descriptions. Allow more than 30 seconds for previews. Increase tv show previews to 90 seconds. Bring split screen to the iPad. Bring proper file management to iOS. Bring PDF to print to iOS.

The 13" iPad should be turning the iPad into a true post-PC replacement. Make it happen, Apple. You should have done it three years ago, but Steve Jobs died. Excuse accepted, but get on with it. Cook has obviously not been kicking your butt.


I can't believe this was upvoted. The last thing Apple should do is abandon investment in Siri and technologies like Handoff. Voice isn't dead. In fact Microsoft is making huge investments in Cortana and wants it everywhere. IMO Apple's problem is they haven't improved Siri fast enough and spent too much time on silly things like having Siri bring back cutsy/smart alec responses to queries. Apple needs to get better at push and predictive. The Watch will force them to do that as its strengths are in push, not pull, not go launch an app for everything you want to do.
Score: 14 Votes (Like | Disagree)

ethanwa79
Please give us developers a Siri SDK. Please.
Score: 14 Votes (Like | Disagree)

tricil
Will Find My Watch work on the watch I ordered over a month ago that still isn't here yet?