Apple fans waiting for updates to the 15-inch MacBook Pro and 27-inch iMac may get good news sooner than expected, with MacG.co [Google Translate] reporting on Monday that updates to both models are expected as soon as this Wednesday.

The website cites an unnamed source who has provided accurate information on a number of occasions in the past, but provides no further details regarding the exact specs and upgrades that could go into the two new computers. Given that the 13-inch MacBook Pro was updated back in March with the expected processing and graphics boosts, as well as a new Force Touch trackpad, it's safe to say the new 15-inch model should receive similar upgrades.

As MacG.co points out and we have discussed in recent days, shipping times for the 15-inch MacBook Pro have been slipping, sparking speculation of a WWDC reveal for updated models.

It is unclear exactly what processors will be included in the new MacBook Pro, as Intel's timeline for Broadwell chips had previously estimated a July-August release for chips appropriate for the machine. Intel did, however, quietly launch a few higher-end chips in the Broadwell family two weeks ago, suggesting production may in fact be ahead of schedule.

The site doesn't touch much on the iMac update, beyond pointing out that the only model with a delayed shipping estimate is the higher-end non-retina 27-inch iMac with a 3.4 GHz processor. We noted slipping shipping estimates on iMacs a month ago, but while most of the models returned to "in stock" status shortly after, it now appears Apple has indeed been drawing down stock ahead of this week's update.

Delayed shipping times in the weeks ahead of a major event like WWDC generally appear as good indicators of what product categories may be getting an update, but given recent updates to the MacBook Air and 13-inch MacBook Pro, the release of the new MacBook, and the pending 15-inch MacBook Pro and 27-inch iMac updates, Apple could once again have a software-focused WWDC keynote similar to last year unless it decides to show off an update to the Mac Pro.

I hope the new 15" is redesigned. Else I will skip that release.

I'm guessing they're going to treat this as a minor spec bump, release it early so they don't have to talk it up on stage, which will give them leeway to announce a 'proper' update when the skyline stuff is ready.


This sounds spot on.

15" Macbook Pro would have been announced at Apple Watch event with the 13" had Intel had the chips ready - they didn't, so now it'll come with all the same upgrades as the 13"

People spend more time on this boards waiting for things to come out than just buying and using them!
Score: 10 Votes (Like | Disagree)

So why isn't Apple waiting to update until this fall? I can't see them updating in May and then again in the fall. Unless they're working on a redesigned machine for Skylake and they will announce that in the fall?


Don't be surprised if Apple releases a Broadwell 15" MBP on Wednesday, and then turns around and releases a Skylake 15" MBP in October.
This wouldn't be the first time Apple did something like this: in October 2005 Apple released a brand-new PowerBook (turned out to be the final one) and then in February 2006 -- JUST FOUR MONTHS LATER -- Apple released and shipped the first-ever MacBook Pro.

Skylakers should wait until at least this Fall's announcements.
Score: 10 Votes (Like | Disagree)

inkswamp
Always with the updates for iMacs and MacBooks. If Apple wanted to be a little more honest about things, they should rename the Mini. :D 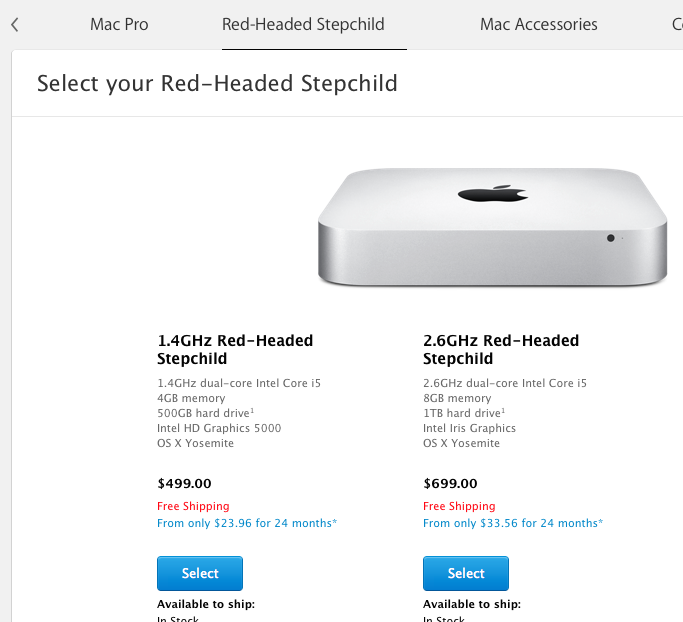