The much-rumored 12.9-inch so-called "iPad Pro" will feature a built-in NFC chip, pressure-sensitive Bluetooth stylus, Force Touch and USB-C port, according to AppleInsider. The report, citing a source familiar with Apple's future product plans, also claims that the larger iPad will have a new touchscreen with improved latency and unsurprisingly be powered by Apple's latest A-series processor. 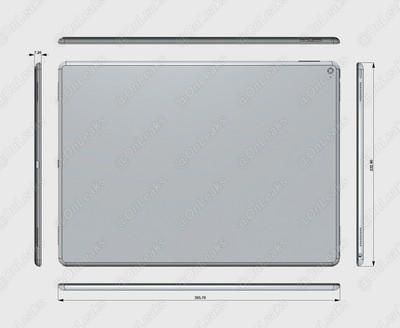 A purported "iPad Pro" blueprint from December 2014 with possible dimensions
The inclusion of an NFC chip will enable the iPad Pro to be used as an Apple Pay payment terminal, although it is unlikely the tablet itself will have tap-to-pay functionality, according to the report. Apple Pay contactless payments are currently limited to the iPhone 6 and iPhone 6 Plus, and iPhone 5, iPhone 5c or iPhone 5s when paired with an Apple Watch, in the United States.

Meanwhile, the report corroborates well-informed KGI Securities analyst Ming-Chi Kuo's claim that the iPad Pro will feature an Apple-built stylus, which AppleInsider says will connect via Bluetooth and allow pressure-sensitive input. The iPad Pro's display will also reportedly feature Force Touch, a technology that distinguishes between a tap and a deep press on the screen.

The report adds that the iPad Pro's USB-C port will either replace or supplement the Lightning connector equipped on other current iPads:

"The source also said that Apple's new, larger iPad will also feature a USB-C input, though they didn't indicate whether it would be a new, second port option, or if USB-C would replace the Lightning connector found on current iPads. Cases based on allegedly leaked "iPad Pro" designs have included spaces for two port openings, leading to speculation that Apple could potentially include both USB-C and Lightning, or offer docking capabilities in two different orientations."

Many of these rumored iPad Pro features have been reported by other sources over the past year, including The Wall Street Journal, Bloomberg and Kuo.

The report stops short of providing a release timetable for the iPad Pro, although The Wall Street Journal reported in March that Apple is planning to begin mass production of the device in September following some internal setbacks. Apple typically refreshes its iPad lineup in October, and it's possible the iPad Pro could launch around that time if there are no further production delays.

Who is the target market for this because if it only has IOS apps the iPad Air 2 is fine for me.

I would reconsider if OS X was utilized with touch force.

Who is the target market? Those for who the iPad Air 2 is NOT fine.
Score: 6 Votes (Like | Disagree)

dannys1
The (almost) 13" touch screen alone is a market in itself for those that keep asking "whos it aimed at" - some pros will buy this just to run ONE app on. Mix engineers for instance who want to swap over to touch screen mixing, you can fit much more mixing desk on this than the iPad Air 2. Its tiny compared to Apple's market in most things but Slate Digital sell a large touch screen system just for running Pro Tools on alone which is at least 3x the price any potential Apple product would be.

It's as a genuine pro device should be, a niche product and moaning about Apple making niche products is bizarre, the company is so large now we should be amazed they're even bothering to make anything outside of the iPhone and their three best sell secondary devices. Just because you can't see the benefit of Candy Crush Saga on a larger screen doesn't mean there's a section of professionals who'd fall over themselves for an iPad quality touch screen to control input on their application.

Having the iPad as a pay terminal is a fantastic idea too - this is about the right size - I know when I had my store the touch screen terminals were AWFUL - being able to replace all of those with large iPads would be amazing. It would also remove the shady under world of business to business sales of over pricing for really poorly made niche software.
Score: 4 Votes (Like | Disagree)

Have you had extended time using a Surface Pro? There is a difference between the theoretical of using a desktop OS on a tablet, then there's the reality.
Score: 3 Votes (Like | Disagree)

James Manesh
There's a lot of potential in this, especially for enterprises.

An Apple engineered/designed stylus + force touch can open up some new and interesting ways of using iOS.
Score: 3 Votes (Like | Disagree)

tillsbury
A really good stylus and a killer PDF annotation / note-taking / OCR application included would make this a must-have for all students everywhere. That's a market worth having.
Score: 2 Votes (Like | Disagree)
Read All Comments

Thursday July 9, 2020 10:14 am PDT by Juli Clover
Apple today seeded the first public betas of upcoming iOS and iPadOS 14 updates to its public beta testing group, two weeks after first providing the updates to developers after the WWDC keynote and a day after seeding the second developer betas. Public beta testers who have signed up for Apple's beta testing program can download the iOS/‌iPadOS‌ 14 updates over the air after installing ...
Read Full Article • 152 comments