Several celebrities like Katy Perry, Drake, and Pharrell Williams have been spotted with the gold Apple Watch Edition ahead of the device's launch, but Apple gifted designer Karl Lagerfeld with something even more special -- a custom gold Apple Watch with a gold Link Bracelet.

In an image shared on Instagram by Lagerfeld's assistant and bodyguard Sebastian Jondeau, Lagerfeld wears a yellow gold Apple Watch with the one-of-a-kind yellow gold Link Bracelet, which Jondeau says was "specially made" by Apple. 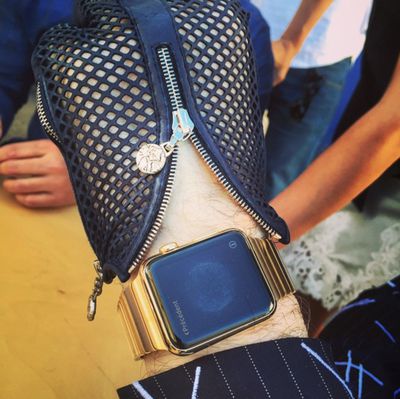 Karl Lagerfeld is a well-known fashion designer who's the head of both Chanel and Fendi, in addition to his own fashion house. Lagerfeld was present at the Apple Watch's first public appearance at French Parisian boutique Colette and as a style icon, he could be an important asset for Apple's Apple Watch marketing efforts.

Though there's a Link Bracelet for the Silver and Space Black stainless steel Apple Watches, Apple did not make a similar band available for the gold Apple watch Edition, presumably due to price and the sheer amount of gold that would be necessary for such a band. The existence of a custom gold Link Bracelet does, however, suggest that such a band could be made available to the public in the future.

Just the gold used in the Modern Buckle band raises the price of the Apple Watch Edition from $10,000 (with Sport band) to $17,000, so the price of a pure gold Link Bracelet would likely be upwards of $25,000. The Link Bracelet for the standard Apple Watch is priced at $449 and is Apple's most expensive band.

As we creep closer to the April 24 launch of the Apple Watch, we may see more custom designs like this on the wrists of celebrities and other fashion designers as Apple hopes to use these influencers to convince people to drive Apple Watch sales.

roland.g
And that glove he has on. Designer maybe. But what some people call fashion, the rest of us just know is gaud awful tacky.
Score: 113 Votes (Like | Disagree)

webbuzz
Nilay Patel is going to be jealous of that glove. :D
Score: 69 Votes (Like | Disagree)

Albright
Pretty cool that all these wealthy celebrities are being given expensive watches only they would be able to afford in the first place, I guess.
Score: 64 Votes (Like | Disagree)

New product whose utility function is still up for significant debate.

The next new product Apple comes out with must be of the impact of the iPhone. After this announcement, and the release of a product that so many view as somewhat unnecessary, the pressure is on to deliver something that will appeal to the masses. Otherwise, Apple should be viewed as a company that is trying to manipulate loyal customers for the purpose of more profit.

The next one has to be a home run, because I have a feeling this one is not the next "thing." They will sell, at least in the beginning, because all Apple products do.. But sales will still be disappointing.

Anyone else find it odd, by the way, that a company whose motto seemed to be to "think different," which included an advertisement containing the likes of Albert Einstein and Bob Dylan is now releasing a product in a way that is entirely symmetrical with mainstream commercialism so prevelant these days? Overpriced designer fashion houses? Vogue magazine? Gold watches, iPhones, MacBooks? All symbols of the "elite."

I don't get any of it, except the continued chase of the almighty dollar.. Maybe.
Score: 33 Votes (Like | Disagree)

Thursday January 27, 2022 12:08 pm PST by Juli Clover
Apple today seeded the first betas of iOS 15.4, iPadOS 15.4 to developers for testing purposes, adding a slew of new features to the latest iOS operating systems. iOS 15.4 is the biggest update that we've had to iOS 15 to date, and it brings Universal Control, Face ID with a mask, new emojis, and tons more. Face ID With a Mask With iOS 15.4, there is now an option to unlock your iPhone...
Read Full Article • 61 comments

Wednesday January 26, 2022 6:00 pm PST by Juli Clover
Apple is working on a new payments service that will allow iPhones to accept payments directly on device with no additional hardware, reports Bloomberg. Right now, iPhones can accept credit cards with add-ons like the Square Reader, but Apple's new technology will eliminate the need for a third-party product. Individuals and small businesses will be able to accept payments with the tap of a...
Read Full Article • 137 comments

Wednesday January 26, 2022 10:19 am PST by Juli Clover
Apple today released macOS Monterey 12.2, the second major update to the macOS Monterey update that launched in October. macOS Monterey 12.2 comes over a month after the release of the 12.1 update, which brought SharePlay support. The ‌‌‌macOS Monterey 12.2‌‌ update can be downloaded on all eligible Macs using the Software Update section of System Preferences. Apple has also...
Read Full Article • 193 comments