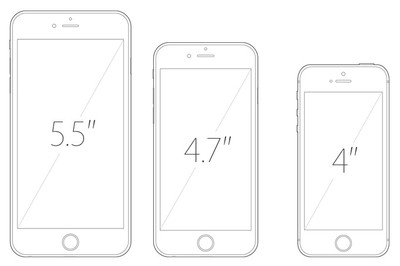 Apple will release three different iPhones in the second half of 2015, the iPhone 6S, iPhone 6S Plus and a 4-inch device currently being referred to as iPhone 6C, according to industry sources.

A new 4-inch iPhone was also rumored in December 2014, with a report claiming that the device would be aimed toward female users. However, even if a new 4-inch iPhone isn't introduced, Apple will presumably have the iPhone 5s to offer for free on a two-year contract once the current models slide down.

Apple is expected to announce new iPhone models in September, with new additions to both the iPhone 6s and 6s Plus rumored to include 2GB of RAM and Apple's new Force Touch technology, which has already made its way into Apple Watch, the new MacBook and new 13-inch MacBook Pros.

ctross
I just pray they keep good specs in the 4 inch display!

I have large hands, I can palm a basketball easily, and I think the iPhone 6 display is simply to big.

When Steve Jobs said the 4 inch display was the perfect size because your thumb could easily manage the corner of the device, he couldn't have been more correct.
Score: 81 Votes (Like | Disagree)

eatrains
Another vote for a smaller flagship. The 6 and 6+ are clown phones.
Score: 38 Votes (Like | Disagree)

chriscrk
New iPhones this year? That's so unlike Apple!
Score: 30 Votes (Like | Disagree)

barkmonster
If they could make 32Gb the entry level on all sizes. Every other feature is just a bonus.
Score: 29 Votes (Like | Disagree)

QCassidy352
I have a 6 and like it, but when I use my gf's iphone 5, I'm reminded that 4" really is the sweet spot. I'd go back in a heartbeat, if it was otherwise comparable to the bigger models.
Score: 14 Votes (Like | Disagree)
Read All Comments