Apple Raises Prices on Several Products in Many Countries Amid Strong U.S. Dollar

While Apple discounted the Apple TV to $69 in the United States this afternoon, it also raised the prices on several products across many countries due to the strength of the U.S. dollar. A wide selection of Apple products, including the iPhone, iPad, iPod touch, MacBook Air, MacBook Pro and Thunderbolt Display, are now more expensive in Canada, Australia, New Zealand, France, Denmark, Sweden, Finland, Portugal and multiple other countries to reflect currency adjustments. 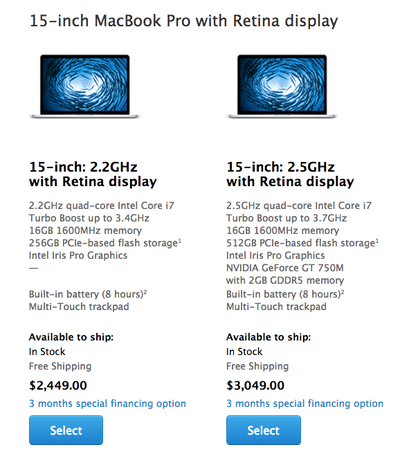 Apple has made similar price adjustments in countries around the world today in order to ensure parity with United States pricing, following a period in which several Apple products were actually priced at a bargain compared to American prices. For instance, prior to the pricing adjustment, the Thunderbolt Display retailed for $999 in Canada, the same price as in the United States, which converts to around $799 in U.S. dollars based on the average conversion rate over the past month.

The updated prices went into effect following the return of the Apple Online Store at the conclusion of Apple's "Spring Forward" media event in San Francisco this afternoon. Should the U.S. dollar weaken, as happened in July 2011, Apple will continue to make the necessary adjustments in order to ensure that its products and services are as consistently priced as possible throughout the world. In some cases, international prices will remain higher than U.S. prices due to taxes, import duties and to create a buffer against currency fluctuations.

Glassed Silver
Out of curiosity, did Apple raise wages for its staff around the world?
Legit question, I simply don't know, but I assume I'd have read about this by now on here? :confused:

PS: I know why they wouldn't do it, I didn't expect anything else, but I felt like giving them the benefit of doubt for as long as I really don't know any better.
You see, they escape taxes left and right, arguably their share holders are some form of pressure too and they halfheartedly pressure governments to fix some tax codes, noted.
However, while the "small guy" in the chain is supposed to make up for currency fluctuations on products that have already obscene margins whilst well ignoring that people's incomes didn't suddenly spike, they aren't leading by example, meaning raising wages where products become more expensive, too.

Apple has always asked premium prices, but recently they are becoming quite greedy, especially with hidden costs of which there are plenty, granted, some dating back to Jobs times, too.
Score: 36 Votes (Like | Disagree)

JGIGS
I know exchange rate isn't Apples fault but I already feel like most of their products are overpriced as it is. Not to mention how buggy ios and osx have been lately.

I've been an Apple guy for awhile but with how far Android has come and the strides Microsoft has made I might think about jumping ship next time I have to upgrade.
Score: 30 Votes (Like | Disagree)

thank god I moved to the US...

Broph
It's funny how they won't lower the price though when the opposite is happening (like when the Australian dollar was nearly 1:1 with the US Dollar).
Score: 19 Votes (Like | Disagree)

oldmacs
Every single Apple Laptop went up by $200 in Australia sadly :(

Apple should start paying its proper income tax here if it wants to jack up prices (although I do acknowledge prices are somewhat dependent on the exchange rate). The non Retina Macbook went up to $1549 - which is well above the currency conversion and our GST... not overly fair.
Score: 16 Votes (Like | Disagree)

cknibbs
The horrible exchange rate is the single reason I will not be buying an Apple Watch... $519 for the 42mm sport watch? No thanks. I have been using Apple products almost exclusively (where possible) for 15 years, but Apple has been leaving a bitter taste in my mouth. Like others I may be looking at other options come upgrade time. Apple makes products that are high quality and that's for certain, but their prices are beginning to become ridiculous.
Score: 15 Votes (Like | Disagree)
Read All Comments

Wednesday June 29, 2022 5:23 pm PDT by Sami Fathi
The redesigned MacBook Air with the all-new M2 Apple silicon chip will be available for customers starting Friday, July 15, MacRumors has learned from a retail source. The new MacBook Air was announced and previewed during WWDC earlier this month, with Apple stating availability will begin in July. The MacBook Air features a redesigned body that is thinner and lighter than the previous...
Read Full Article • 282 comments