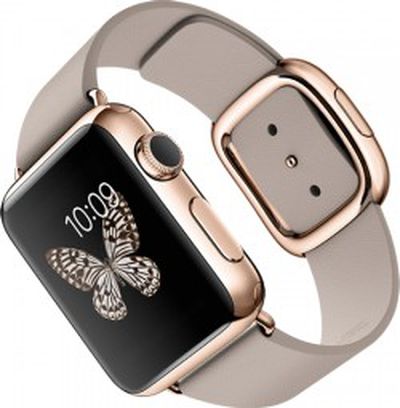 Apple design chief Jonathan Ive recently discussed the meticulous process that went into creating the Apple Watch in a new profile with Financial Times. Ive describes the Apple Watch as "the most personal product" that Apple has ever made, with "thousands and thousands of hours of evaluation and testing" invested into the device.

“Even now, when the design of the Apple Watch is incredibly mature and has gone through thousands and thousands of hours of evaluation and testing, we’re still working and improving. You are trying to keep everything fluid for as long as possible because everything is so interconnected. The best products are those where you have optimized each attribute while being very conscious of other parts of the product’s performance.”

The iconic designer adds that he appreciates the convenience afforded by the Apple Watch, describing the wrist as the perfect place for the technology. The device, for example, will have a Glances feature on the watch face that delivers real-time information such as weather, stock quotes and upcoming calendar events without needing to take your iPhone out of your pocket.

“One of the things that struck me,” says Ive, “was how often I’d look at my watch and have to look again quite soon afterwards, because I hadn’t actually comprehended what the time was. If I had looked at something on my phone, because of the investment involved in taking it out of my pocket or my bag, I would certainly pay attention. I quite like this sense of almost being careless and just glancing. I think for certain things the wrist is the perfect place for this technology.”

"He runs through the three ranges of Apple Watch with their different materials – the stainless-steel Apple Watch, the anodised-aluminium Apple Watch Sport (both from $349) and the Apple Watch Edition in 18ct yellow or rose gold (with an as yet unconfirmed price of around $4,500)."

Ive's so-called "fanatical" attention to detail extends beyond the Apple Watch to the packaging of the wrist-worn device. The box for the Apple Watch Edition in particular will be crafted from premium materials, including aniline-dyed leather on the outside and an ultra-suede material on the inside. The small box is capable of charging the Apple Watch and its bottom half slides out based on friction, similar to past iPhone, iPad and iPod packaging.

“We didn’t want the packaging to be a sort of shorthand for value, where the box needs to be big and we have to include expensive materials. We’ve always liked the idea that if we are heavy in our thinking, we can be much lighter in the implementation. So there’s huge virtue, I think, in keeping the packaging small: at least, it is the right choice environmentally, it’s easier to move things around and you don’t end up with your wardrobes full of large watch boxes that you don’t use.”

Apple is expected to provide more details about the Apple Watch at its highly-anticipated "Spring Forward" media event on March 9th in San Francisco. Ahead of time, the company has been working closely with developers in a top-secret lab to create what will be some of the first apps for the wrist-worn device. Apple Watch will be available in April starting at $349 for the entry-level model.

Update: Apple has confirmed to MacRumors that FT's statement regarding both aluminum and stainless steel versions starting at $349 is incorrect.

Jony Ive flatters himself for an unreleased unproven product, more news at 11.


Because he has such a terrible track record. :rolleyes:
Score: 26 Votes (Like | Disagree)


Ok so go back to Mavericks. No one is stopping you. The rest of us like Yosemite
Score: 22 Votes (Like | Disagree)

Donoban
This guy is so full of ****. I swear all Apply employees take training lessons how how to talk for hours without actually saying anything.
Score: 17 Votes (Like | Disagree)


I like the changes.. I honestly think your in a minority when it comes to that opinion.

Can't please everyone all the time.
Score: 16 Votes (Like | Disagree)
Read All Comments