Despite rumors earlier this week suggesting the 12-inch Retina MacBook Air could see a launch during Apple's upcoming March 9 media event, The Wall Street Journal tonight released a report indicating the notebook won't be shipping until Q2 2015. The site shared the tidbit in a detailed report on upcoming features that might be added to the larger-screened 12.9-inch "iPad Pro."

While suppliers are gearing up to ship the new 12-inch MacBook Air in large quantities in the second quarter, Apple's launch schedule remains unclear, the people said.

A Q2 2015 shipment date for the 12-inch MacBook Air suggests Apple could be planning to launch the notebook around June, possibly at its Worldwide Developers Conference. Apple has launched products during WWDC before, introducing the Mac Pro in 2013 and the Retina MacBook Pro in 2012. 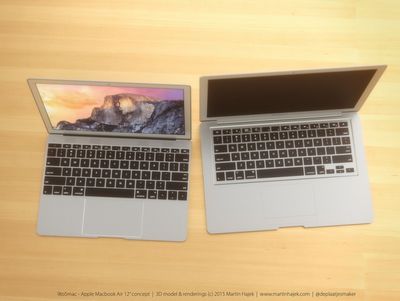 Rendering of the 12-inch MacBook Air next to an existing MacBook Air by Martin Hajek
Aside from a potential launch date for the notebook, there's one other significant point of interest in The Wall Street Journal's report -- a clear distinction between the 12-inch MacBook Air and the 12.9-inch iPad Pro. Some users have speculated that due to the similarity in screen size and the iPad-like features rumored for the 12-inch Retina MacBook Air, the two products are actually one, but this new report makes it very clear that Apple is developing two separate product lines.

There is some convergence between the two products, despite the fact that one is an iPad and one is a MacBook. The 12-inch MacBook Air is rumored to have iPad-like colors, fewer ports, and no Magsafe charger, while tonight's WSJ report points towards an iPad with USB ports, but it's likely the two products will continue to be separated by operating system.

Though Apple may not plan to launch the 12-inch Retina MacBook Air during its March 9 event, there's still a good chance the company may refresh its existing 11 and 13-inch MacBook Air lineup, which are overdue for an update. Screenshots said to be from a 13-inch MacBook Air with a Broadwell processor and integrated Intel HD 6000 graphics were shared this afternoon, suggesting a refresh is imminent.

Boris-VTR
As usual, nobody knows anything. Yesterday it was almost 100% to be revealed on march 9th, but today they are almost 100% it wont come out until september.
Just relax and wait for 3 more days until is official.
Score: 15 Votes (Like | Disagree)

sualpine
Post a million rumors and then you're bound to be correct for at least one of them...
Score: 9 Votes (Like | Disagree)

TxExCxH
Wait a few hours,later today it will be delayed until October due to retina screen issues.
Score: 7 Votes (Like | Disagree)

AngerDanger
Nope, I don't think computers can be cute… that would be weird.

Anyone who thought we'd see a new Air at this upcoming event is kinda stupid. It's for one thing; and one thing only, the Apple Watch.


Oy, who ya callin' stoopid, stoopid?
Unless you're a stage hand setting up the demos for this Monday, you're as much in the dark as anyone else.
That's why we all come here to MR to speculate and discuss *rumors*.
Right or wrong.... it makes no one here stupid.
Score: 4 Votes (Like | Disagree)
Read All Comments

Saturday May 21, 2022 9:00 am PDT by Hartley Charlton
With around four months to go before Apple is expected to unveil the iPhone 14 lineup, the overwhelming majority of rumors related to the new devices so far have focused on the iPhone 14 Pro, rather than the standard iPhone 14 – leading to questions about how different the iPhone 14 will actually be from its predecessor, the iPhone 13. The iPhone 14 Pro and iPhone 14 Pro Max are expected...
Read Full Article • 314 comments