Wednesday March 4, 2015 10:45 pm PST by Eric Slivka
Following up on a report from earlier today claiming Apple has pushed back its plans for the so-called "iPad Pro", asking suppliers to begin production in September rather than this quarter, The Wall Street Journal weighs in with its own claim that Apple is indeed now targeting the second half of this year for the mass production of the device. 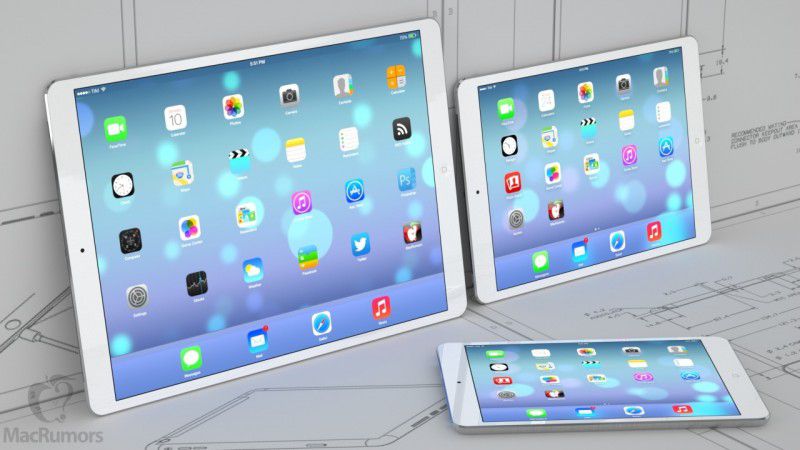 Beyond timing, the report also claims Apple is still tweaking plans for the iPad Pro's design and feature set, with the company considering including USB 3.0 ports to accommodate data transfer and peripherals connectivity.

“Apple has continued to rework some of the features of the larger iPad. It is now considering the faster technology for data synchronization between the larger iPad and other computing devices,” said the person. [..]

The company has also been considering adding ports to connect to a keyboard and mouse, the people said.

Apple is reportedly also looking into ways to speed up charging time for the iPad Pro, as the device will almost certainly come with an even higher-capacity battery than the iPad Air family.

ErikGrim
"The company has also been considering adding ports to connect to a keyboard and mouse, the people said.”

That is literally the dumbest statement anyone in a world where wireless mice and keyboards have been the norm for more than a decade have made.
Rating: 26 Votes

Reason077
In other news, sources claim next iMac will ship with a floppy disk drive.
Rating: 8 Votes

BBCWatcher
"Adding ports to connect to a keyboard and mouse?" What is this, 1995? :eek:

I agree with JoEw. More believable would be a pair of reversible Type-C USB 3.1 ports. If somebody wants to hook a keyboard or mouse to one or both of those ports, fine, but they'd be at least somewhat more generalized than that.
Rating: 8 Votes

Silver78
The past year i've had a dream of the apple watch, iphone and 12" ipad.

Felt that those 3 things would fit me perfectly. But that was last year.

Honestly now the idea of 12" ipad is not a "wow" idea anymore but more like "well why not" and i would propably go for a 12" if i decide to replace my ipad 4.
But im no longer knocked of my feet by the thought of 12" ipad. Larger internet surfing screen and movie watching but the rest .... An extra set of icons on screen, the appstore destroyed by freemium crap and no real news in apps.

All the talk about mac air still going with 1400x900 resolution and no Macpad is so disappointing.

"Apple you are loosing me" first with the mac mini and now you are stalling progress with possible devices comming out 2015 that should have been on the streets in 2014.
Look at how the competition are spraying out gorgeous full OS tablets... Us applefans are getting an extra row of icons!?
I allready went with the intel NUC and my last ipad upgrade was a windows tablet instead.
I really really want to stay in apple land but apple you are making it very difficult
Rating: 7 Votes

illegalprelude
Basically like most rumors, nobody has any idea what they're talking about. Only difference is that these guys can hide behind being an 'analyst.'
Rating: 6 Votes

randyj
That would be great to shoot tethered with the iPad.
It would also be great if it had an SD card slot too.
Rating: 5 Votes

Trey M
Totally agree with a lot of what's been said above. "Adding ports for a mouse and keyboard". That is the most un-Apple move possible and it will never happen. That alone makes me seriously doubt this source and its credibility.

I also think it makes no sense for an iPad Pro to include USB 3.0 ports. If the rMBA really will have solely type c usb, then the usb c would be an obvious choice for the iPad Pro given Apple's obsession with smaller and smaller ports and consistency among product lines.

Apple knows it will get tons of bad PR initially (as a lot of their products have in the past at first) since the rMBA will, supposedly, be type c usb only. However if they brought this same standard to the iPad Pro, it would make the standard more familiar and acceptable as an option users would want (since the new accessory they bought will work with both their iPad and MacBook).
Rating: 4 Votes

This intrigues me. I wonder how IOS will deal with USB connectivity. Perhaps they just mean a type-c port?


iOS supports USB-already? And a move to USB 3.0 does not have to mean a move to a actually USB-port on the device. Lightning does fully support USB2.0 and that's precisely what you use when you connect your Lightning to USB port into your Mac or power-brick.

There are more than enough connectors on the Lightning cable already, all Apple really needs to do is adding USB3.0 in the USB-end of the Lightning cable and nothing else. Thus far it's been rather pointless due to the nature of the NAND flash in the devices with random read / write being lower than the transfer cap of USB2.0 so the benefit of going USB3.0 has yet to be present.


But as the next generation of iPhone's and iPad's will most likely make the move to UFS and this new SSD + eMMC combination we will properly start to see random read / write speeds shattering the maximum capabilities of USB2.0 so then it might be time to make the move towards USB3.0.


There is no real benefit for Apple to make the move from Lightning to USB Type-C on the devices itself. It does not offer anything the Lightning does not already support other than it being the new "universal standard" in the market in the next few years.