As promised in January, the newest game in the EA-owned Sims franchise, The Sims 4, is now available for purchase on the Mac. The Sims 4 initially launched for PC back in September of 2014, but it's taken several months for the company to ready a Mac version of the game.

Like other games in the franchise, The Sims 4 tasks players with the creation and control of the lives of virtual characters. The goal of the game is to guide sims through life, establishing relationships, building homes, advancing through careers, and conquering goals.


The Sims 4 begins with creating a sim with deep customization options. It's possible to randomly create a sim to start the game off in just a few minutes, but for those who would like select each aspect of their sim, the options are available. You can customize facial features, hair, accessories, makeup, and select outfits for every occasion from day to day wear to party wear.

Beyond the physical, creating a sim also involves choosing a name, personality traits that affect how sims interact with other sims, and a lifetime aspiration like reaching the top of a career ladder, having a big family, or hosting amazing parties. 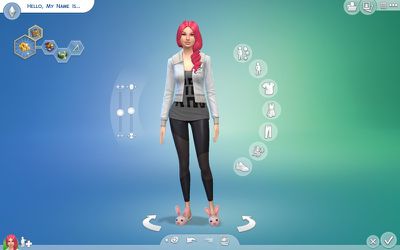 Once a sim is created and ready to move into the world, the idea is to choose a house and direct your sim through life. With The Sims, the possibilities are endless. Sims can lounge around all day watching TV and being slobs, or pick up a job and pursue a career in several different fields, including crime, business, food, and more.

Sims have a never-ending list of minor achievements that are based on their relationships, personality, and lifetime goal, so gameplay largely involves fulfilling these minor achievements (a goal might be talking to a friend, cooking a meal, or buying a household item), earning money, building families, and progressing through the sim's life. Amidst all of this, it's also necessary to meet a sims' basic needs like hygiene, food, and sleep.

Building houses and community lots is the other major aspect of gameplay in The Sims, and in The Sims 4, a lot of the building tools are easier to use and more intuitive than in past games, making it easy to create detailed structures that range from the simple starter house to sprawling castles.

The Sims 4 has a thriving online community where it's possible to download sims, houses, and rooms created by other users or upload your own. This content is accessible from the "Gallery" option marked by a portrait icon at the top of the screen. The gallery is home to a huge collection of content that can be added to your game with just a few clicks -- one of the most impressive aspects of The Sims 4.

The Sims 4 has received some criticism for notable gameplay changes and features that were stripped from the previous game, but EA has pledged updates that will return some of the missing functionality to the game over the course of time. EA has already re-added pools and ghosts, two major features that did not ship with the game, and two additional free content updates have added genealogy to track sim family lines, holiday items, and two new careers.

EA's also released a major content pack for The Sims 4, Outdoor Retreat, which introduces a new vacations feature, new areas to explore, new traits, new skills, and more. Along with the full game, the new expansion is available on the Mac.


We tested The Sims 4 for Mac over the weekend ahead of its launch and we didn't encounter any significant bugs, performance issues, or lag when playing the game. Performance was equivalent to the PC version of the game. Of course, some users could still see issues, but on a 2013 iMac and a 2012 Retina MacBook Pro, the game ran well. System requirements can be found here.

The Sims 4 is missing some of the content from The Sims 3 and has some major differences in gameplay, namely that it's no longer possible to travel around the world without loading screens, but it should be noted that the game's performance has been much improved by some of these tweaks to the gameplay -- The Sims 4 runs quickly and has minimal lag.

If you've been playing The Sims 4 for PC and want to transfer your saved game to Mac, that's possible with a USB drive. Simply copy the "saves" folder from the PC and transfer it to The Sims 4 folder on the Mac, and the save files will be available and ready to play once you log into The Sims 4 on a Mac.

The Sims 4 for Mac be purchased through EA's Origin platform for $39.99. There's also a deluxe version available for $46.66, which includes exclusive bonus content. Outdoor Retreat can be purchased for an additional $19.99. If you already own the PC version of the game, you can download the Mac version at no additional cost.

Bentron
Tip for any potential buyers. If you use Hola on chrome, set it to browsing from Mexico and go to the Origin store there. I was able to get the Deluxe version for $29 (or £18 for me), paid with PayPal and no hitches. Hope this helps! :)
Score: 12 Votes (Like | Disagree)

hlfway2anywhere
No App Store, No Purchase.
Score: 7 Votes (Like | Disagree)

I purchased it on Origin. I cannot see any signs of Cider in the package. Looks native.
Score: 4 Votes (Like | Disagree)

Can you explain how to do this?:)


Sure! First you need to download Hola from http://hola.org (http://hola.org). Next, using Google Chrome (Hola doesn't work with Safari) set Hola to 'Browsing from Mexico". Go to the EA Origin website. It should automatically go to the Mexican site. Find the Sims 4 (it is on sale in Mexico at the moment, hence the cheap price), add to cart. You'll either need to log in or create an account depending on if you've used origin. When paying, just pay using paypal to negate any bank/card issues. The game should then be found in your 'My Games' in Origin. Hope this is useful, let me know if I can help with anything! :)
Score: 3 Votes (Like | Disagree)