Sunday February 15, 2015 4:26 pm PST by Joe Rossignol
A largely unmarked van with rooftop cameras, similar to the one originally spotted roaming Bay Area streets earlier this month, has been captured on video in Palo Alto, California. MacRumors obtained the footage from reader Jonathan Shiu, who recently recorded the van driving past Juana Briones Park on Clemo Avenue, a residential side street located approximately 10 miles from Apple's headquarters in Cupertino.


It has been increasingly speculated that these fifth-generation Dodge Caravans, which are reportedly leased to Apple, are part of the company's work on an electric car, but it is also possible that the vans are being used for a project similar to Google's Street View. It is conceivable that the rooftop cameras are being used to either collect mapping data for Apple Maps or as sensors to assist with self-driving initiatives.

Earlier this week, the Financial Times reported that Apple is hiring automotive experts to work in a top-secret research lab located near the company's headquarters. The Wall Street Journal soon followed up with a report claiming that Apple has hundreds of employees working on developing an electric vehicle, and Reuters added that the project will involve self-driving cars.

Clemo Avenue in Palo Alto, California, about 10 miles from Apple's HQ in Cupertino

Apple is likely in the early stages of research and development for any electric car project, and it is fully possible that the iPhone maker scraps the initiative before it ever reaches the public. With both Google and Tesla already invested in electric and self-driving vehicles, it will be interesting to see if Apple enters the industry or remains on the sidelines in the months and years ahead.

MichaelJohnston
How is it 2015 and we're still dealing with VVS? //www.youtube.com/watch?v=Bt9zSfinwFA
Rating: 58 Votes

_Refurbished_
A van, a computer, and a GPS communications device. Are you getting it? These aren't three separate devices. This is one device. And we're calling it iSoccerMom. Today, Apple is going to re-invent the soccer mom.
Rating: 31 Votes

Run out front of it and see if it stops in time. :D


HEY GUYS! IT'S THAT NEW APPLE MINIVAN! LET'S SEE IF IT'S ONE OF THOSE SELF DR*thudunk**thudunk*.
Rating: 23 Votes

It seems almost pointless for Apple start their own street view project, unless they had some major upgrade to the original....which I can't imagine what it would be.

With that said, maybe it was Googles plan all along, but given how awful the original street view photos were, I don't think they ever intended to make the images public. Rather they used them internally to improve maps. Somebody likely said one day "Hey, maybe our users would find these images useful."

If I were to throw in my guess as to what Apple is doing, I would say it's a mix between street view and flyover. Flyover looks great from far away, but is pretty rough at street level. If Apple is driving around and taking "flyover" photos at street level, that could create something as useful as street view, but have it actually have dimension instead of being flat photos. That could be really useful and cool, while also serving the basic purpose of improving map data.
Rating: 12 Votes

wxman2003
Apple is trying to think outside the box to make Safari snappier.
Rating: 10 Votes

Westside guy
Maybe Apple should invest some of those billions of dollars towards finding a cure for those people who are physically incapable of rotating their phones to a horizontal position when shooting video.
Rating: 9 Votes

AppleScruff1
Maybe it's not even an Apple van. :eek: Maybe Google is spying on Apple with an unmarked vehicle.
Rating: 9 Votes

For the reason you listed: many many companies have already done this - coupled with the fact that it is an ENORMOUS undertaking, and Google already has a version available to the public. It just seems like a waste of money.

Maybe if they have some plan to implement the pictures/3D mapping into something much larger I could understand it. But it seems like there has to be a better way to get "street view" than to try build it from the ground up when the competition is miles ahead ;).


This is silly. It's like saying Apple would not make a smartphone because Blackberry is way far ahead. The data might exist, but if it doesnt belong to Apple, it does them no good.
Rating: 7 Votes

troop231
Next week Apple will be driving these prototype vans in collaboration with Disney. Drivers may or may not be disguised as Rick Moranis. 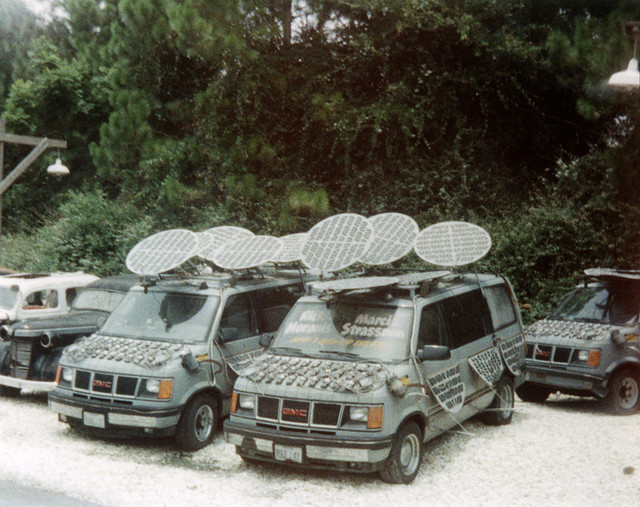 Well, the way to find out if the van is for street view or an electric car is to see if someone is physically driving it.


Run out front of it and see if it stops in time. :D
Rating: 7 Votes