iOS 8.1, released to the public earlier today, included Apple Pay support as its most notable feature, but it also brought several other updates to the mobile operating system, including iCloud Photo Library. With iOS 8.1, the iCloud Photo Library beta is now available to all iOS 8 users, as is a new iCloud Photos app that can be found within iCloud.com.

First introduced during WWDC, iCloud Photo Library stores all of the photos and videos that a user takes in iCloud, making them available on the iPhone, iPad, iPod touch, and Macs through iCloud.com. It will also work with the Photos app that Apple is creating for the Mac, which is expected in early 2015. 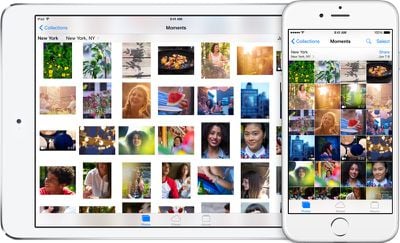 iCloud Photo Library. You’re never without your camera. Now you’ll never be without your photos. Every photo and video you take now lives in iCloud — giving you the freedom to access your library from any device, anytime you want. So you can view a photo from last week or last year no matter where you are.

iCloud Photo Library is designed to keep all of a user's photos synced on all of their devices at all times. When an image is edited on an iOS device in the Photos app with Apple's built-in editing tools, those changes are immediately uploaded to iCloud and visible on other devices right away.

In the iCloud Photos app, users can perform several actions that are also available in the iOS version of the Photos app. Images can be favorited, which sends them to a special "Favorites" album, they can be downloaded in full resolution, or deleted, which removes the photos from iCloud Photo Library on all devices. From the main "Moments" view, it's also possible to click on the "Select Photos" option to delete or download multiple images at once.

iCloud Photo Library does not appear to be working flawlessly at the current point in time, which is likely why it's still given "beta" status. In MacRumors own testing, deleting some photos from the iCloud Photos app did not delete the photos from the iPhone 6 Plus they were taken on. A later sync even returned the photos to iCloud.com.

While iCloud Photo Library was available to developers during the iOS 8 beta testing period, Apple opted to pull it from the iOS 8 golden master ahead of iOS 8's public release and demote it to beta status.

The reason behind iCloud Photo Library's removal from the release version of iOS 8 was unclear, but it is possible Apple delayed the release in light of the negative press iCloud received in early September due to the celebrity photo leak.

With Apple having taken significant steps to bolster the security of iCloud, adding two-step verification and sending security emails when changes are made to iCloud or a device is restored, the company appears ready to let the public have full access to the new photo storage feature.

Celebs with Android phones, BlackBerries were victims too. iCloud wasn't hacked, it was social engineering.
Score: 35 Votes (Like | Disagree)

Astro321
Let's hope Apple does not decide to buy dropbox and try to "icloudify" them. They have truly made the "cloud"services area really really confusing. It should be much simplier and much less confusing than it is currently. Have used dropbox for years now, it works, it works well, and I don't get confused and stumped about what it's doing with my documents.
Score: 5 Votes (Like | Disagree)

joneill55
Me shudders with memories of very beta "MobileMe" that was not quite ready for prime time. This camper passing until the kinks are worked out and it's more bug free.

Once burned, twice shy as they say!

"If one wants to live on the edge of high technology, you gotta be prepared to bleed.......been there, dome that, got the tee-shirt!"
Score: 5 Votes (Like | Disagree)

There is nothing respectful about tossing aside the gift of human intellect and choosing to ignore the truth.


If you can handle using Pages, Numbers, Keynote, etc. than what makes you think this is so bad? It's exactly the same.


The message pops up EVERY SINGLE time and clearly states "This photo will be deleted from iCloud Photo Library on ALL of your devices". It is ignorant and deceitful to pretend otherwise.


Yeah, if you want to use this service for >5GB you pay money. NOBODY IS MAKING YOU USE THIS. You can still do whatever you were doing up until now.


You downloaded an OPTIMIZED version. What don't you understand? The full version is on iCloud, and if you turn the full version setting on you can access it. Maybe it the future the web app will download full versions. ITS A BETA (any idea what that means or is the term confusing?).

Proline, you are incorrect. I hope that others reading this realize that you are making statements that are simply not true. It is not opinion, it is fact, at least in how the system is working for me (I point that out in the case that maybe I have some odd setting, but I don't believe I do).

1) I just took a photo using an iPhone 5.
2) I logged into iCloud.com, and within about 30 seconds the photo disappeared.
3) I picked up my iPhone and deleted the photo...THERE WAS NO WARNING WHATSOEVER. The photo was deleted instantly (albeit moved to the "Recently Deleted" album, not deleted, but I hope I am not being ignorant and I do realize you can restore from the recently deleted album if you'd like). The message DOES NOT pop up every single time as you so contend (at least on my phone).
4) I returned to iCloud.com and within 30 seconds the photo was removed.

In terms of the optimized version being downloaded, that again is something I confirmed through actually taking a photo, viewing its EXIF data from the original on the phone, downloading the uploaded copy from iCloud, and then viewing that version's EXIF data. I did not "accidentally" download any optimized version. I downloaded the 1 and only version that was on iCloud, and it is not a full resolution file as Apple has indicated.

If you would re-read the initial posting I made, the one you emphatically attacked, you will see that I in fact stated, and I quote from the original post: "I am not sure if this is related to the service being a beta". I realize it is a beta. I also wrote in my initial post "Let's hope that Apple has plans to really improve this service."

This thread is currently 8 pages and 178 postings. But when comment about this being confusing, you assert, and I quote again, "No it isn't. Only to you." Ok.

To the others that come to this site for constructive commenting, learning, and assistance, I hope that you find what you are after without being attacked by such condescending members as proline.
Score: 4 Votes (Like | Disagree)

apperently i dont get it ...

wasn't the iCloud Photo Libary supposed to store ALL of your Photos and Videos so you can "make up valuable room on your iOS devices"?

But when i want to delete certain photos from my iPhone they are sent to the "recently deleted fotos folder" and will be deleted from iCloud within 30days too???

sorry but that doesn't make sense to me ... am i doing it right?


Exactly my thoughts. It seems like the total opposite! Now you need a 64GB+ iPhone besides your 64GB+ iPad to be able to use iCloud Photo Library and upload ALL your photos.

There should be an option to not download photos locally, just upload new ones. And be able to see your photos in iCloud when your are connected to Internet.

Monday June 27, 2022 3:38 am PDT by Tim Hardwick
Polish developer Michał Gapiński has released a new and improved version of his "Tesla Android Project" which brings Apple's CarPlay experience to more Tesla vehicles than ever before. According to Gapiński, version 2022.25.1 provides "100% functional CarPlay integration for any Tesla," and comes with several new features and bug fixes. The project now supports DRM video playback so that...
Read Full Article • 157 comments