Access to iCloud.com apps like Mail, Contacts, Calendar, Reminders, Pages, Numbers, and Keynote is restricted until the verification code is entered on the website, but Find My iPhone remains accessible. 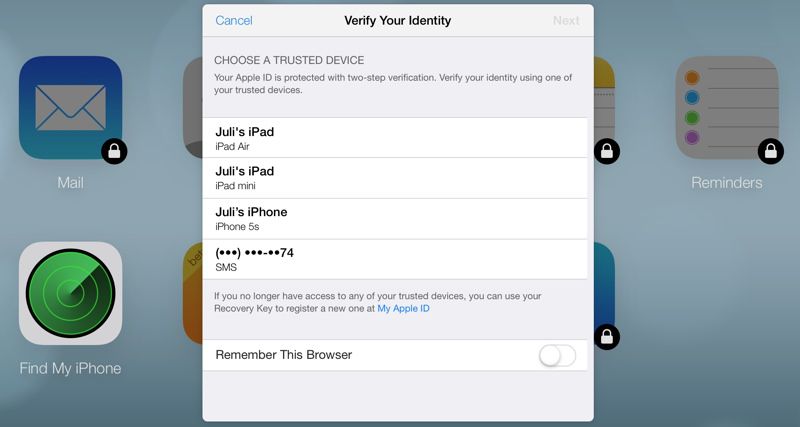 Users also receive an email when their Apple ID is used to sign into iCloud via the web browser, a feature that was implemented following the recent hacking of celebrity iCloud accounts that led to hundreds of photos being shared on the Internet.

Following the hacking incident, Apple CEO Tim Cook pledged to improve iCloud security by expanding two-factor authentication to iCloud and sending out security emails when a device is restored, iCloud is accessed, or a password change is attempted. Cook also said that Apple will aim to increase awareness about two-factor verification.

Originally implemented back in March of 2013, two-factor verification is an opt-in system designed to increase Apple ID account security by requiring identity verification before allowing users to make account changes or purchase content on new devices. It replaces standard security questions with a security code delivered to a trusted device.

Apple first tested two-factor authentication for iCloud.com back in June, well ahead of the iCloud breach, but the feature was not implemented until today.

so you have to own two apple devices in order for this to work?

No, you just have to have SMS. Shows that option right there in the screen shot.
Score: 13 Votes (Like | Disagree)

yaxomoxay
no more Kate Upton then?
APPLE IS DOOMED.
Score: 7 Votes (Like | Disagree)

so you have to own two apple devices in order for this to work?

If it is like the rest of their 2FA, It supports SMS. I had it associated with my Android phone for some time until I recently switched it back to my iPhone.
Score: 6 Votes (Like | Disagree)

My naked selfies are safe!

That's what you think! Btw, please workout a little more before your next round of nude selfies. >;-)
Score: 5 Votes (Like | Disagree)


Anything that relies on 'users' is going to be weak. No matter WHAT you do...
Score: 4 Votes (Like | Disagree)

WolfSnap
This has been working for MONTHS!!

I noticed it a while ago when I logged in months ago. This isn't news, this is just a feature that hasn't been reported on yet.

The whole iCloud "break in" is the dumbest piece of reporting I've seen in a while.

They used a password like, "PASSWORD" or "passw0rd" or "Pass123" or something equally dumb. This is a story about idiots and their bad passwords, not about Apple. Ugh, pisses me off.
Score: 4 Votes (Like | Disagree)
Read All Comments