AT&T is no longer offering Beats Music subscriptions to its subscribers as an add-on service, according to an AT&T employee who spoke to MacRumors. The cellular company has ceased giving customers the option to sign up for Beats Music when purchasing a new phone plan and the Beats Music website has been updated to remove its "Subscribe with AT&T" options.

AT&T employees have also been instructed to stop selling Beats Music subscriptions to customers, suggesting the partnership between Beats Music and AT&T has come to an end following Apple's Beats acquisition. 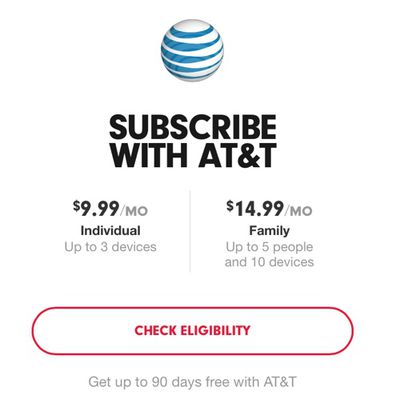 AT&T subscription options formerly offered on the Beats Music Pricing page
Beats Music and AT&T first struck an exclusive deal shortly before the service's initial debut, with AT&T offering multiple Beats Music subscription options, including a family pack that allowed users to share Beats Music with up to five family members. AT&T also offered extended trial periods of up to 90 days and promoted the music service to customers both online and in-store.

It's likely the deal between Beats Music and AT&T has ended due to Apple's $3 billion purchase of both Beats Music and Beats Electronics in May, but it is unclear why AT&T has been able to continue to offer Beats Music subscriptions up until October.

Rumors have suggested that Apple has plans to rebrand Beats Music, and its upcoming retooling may also be the reason behind the dissolution of the AT&T partnership. Along with changing the Beats Music name, Apple is said to be planning to introduce new features and it is also hoping to offer the service at a lower cost, asking music labels to cut their rates.

It is unknown when Apple plans to reveal its revamped music service, but rumors have hinted that its debut could come alongside the 2015 Grammy Awards in February, which means that Apple engineers and designers are likely already hard at work on the rebranding.

There haven’t been any changes for AT&T customers who currently have the Beats Music family plan or who are within their free trial period. New subscribers can still get Beats Music through their app store or at beatsmusic.com.

why do people pay money every month for a limited selection of music thats only online and full of ad trackers/marketing spyware that monetizes your activity and preferences?

i dont get the streaming music fad at all. its incredibly anti-consumer.


For the price of a single album per month, I can access any song, any time, anywhere.

poematik13
why do people pay money every month for a limited selection of music thats only online and full of ad trackers/marketing spyware that monetizes your activity and preferences?

i dont get the streaming music fad at all. its incredibly anti-consumer.
Score: 5 Votes (Like | Disagree)

why do you pay for music?


Because historically the music made by musicians working as a hobby has been really bad!!
Score: 3 Votes (Like | Disagree)

Play any song you want at will and no ads.

why do people pay money every month for a limited selection of music thats only online and full of ad trackers/marketing spyare that monetizes your activity and preferences?

i dont get the streaming music fad at all. its incredibly anti-consumer.


I LOVE IT especially since the supscription through T-Mobile gives u access to Spotify without any of the music streaming counting towards ur data volume. I havent pirated music in like 2 years, it has all the music abd albums i want and helps me discover artists i never heard of before oh and u can save the music for offline listening too. plus the playlists r just awesome. instead of downloading each song of the itunes top 100 or billboard top 100 illegally for example i can just search for a playlist on spotify and have all the music at my disposal by one click. buying music seems dated to me, i barely listen to an album for longer than a month if i even make it through the whole album
Score: 3 Votes (Like | Disagree)

there are so many free options why would anyone subscribe to a paid option.


You get what you pay for. None of the free options come close to what Spotify or Beats offer.
Score: 3 Votes (Like | Disagree)

Free services like Pandora and iTunes Radio are radio stations with ads....
Paid services like Spotify and Beats give you unlimited and ad-free access to millions of songs....

I have bought a yearly subscription to Beats, based on my experience with MOG.

Beats seems to have inherited the MOG library after it bought MOG, but it removed MOG's Artist Radio, which made MOG usable in a Pandora-like fashion, getting the best of both worlds.

Since the removal of Artist Radio, I almost never listen to Beats anymore, even though I have paid for it. Their Sentence feature is a joke and most of the curated playlists are a joke as well.

Beats is so bad that I find that I am back to listening to Pandora most of the time now, even though the streaming quality is lower, at 128k for the free version and 192k for the paid version.

I am not a big fan of Spotify, since their library seems to have less original tracks and more covers (Rdio is similar) than MOG/Beats, but they have a feature similar to Pandora/MOG's Artist Radio so I will probably go with them for a Beats replacement. Pandora has the best song selection algorithm I have ever seen, however.

Beats Music seriously sucks as a streaming radio, or for playlists. Plus they don't even have a desktop app, so you have to play in-browser.