Autodesk today announced the launch of the latest versions of its popular AutoCAD computer-aided design software packages for Mac, adding a number of new features that put the release nearly equal to its Windows counterpart for the first time.

MacRumors spoke with Autodesk product manager Micah Dickerson about the new version, with Dickerson noting an emphasis on cross-platform compatibility for mixed Windows and Mac environments and highlighting a "big four" set of features added in the 2015 version based on customer feedback:

- Dynamic Blocks: Mac users now have the ability to create and edit Dynamic Blocks with a new streamlined yet powerful tool. With Dynamic Blocks, users can build a single block that can be used repeatedly (such as for windows or doors) and simply adjusted in size or shape dynamically rather than creating a static block for each feature. 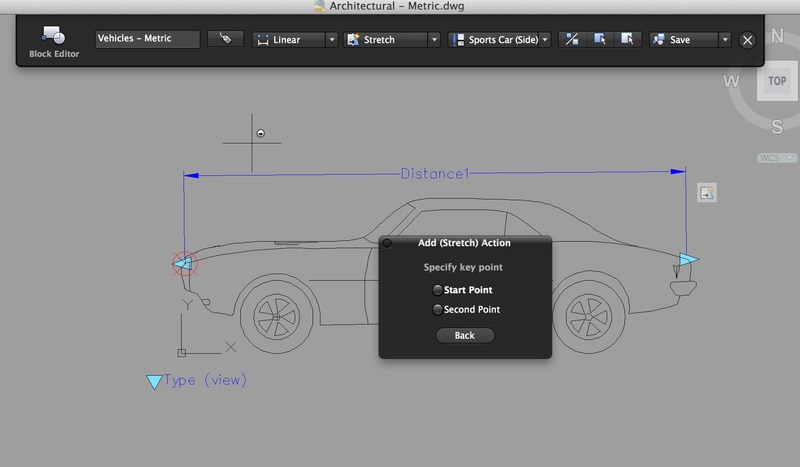 - Layer States: Addressing one of the major barriers to cross-platform usage between Windows and Mac versions of AutoCAD, Mac users can now save layer information such as color, linetype and frozen/locked/off status.

- Quick Select: This feature allows users to easily select objects based on queries, including multiple selection criteria. The feature also includes a new preview function to allow the user to see what objects match the criteria before committing.

- Data Links: Users wishing to associate Excel spreadsheets with their drawings can now do so through Data Links. Changes to the spreadsheet will automatically the corresponding table in AutoCAD, making it easy to keep track of scheduling and costs on various projects.

Dickerson points out that, based on testing so far, AutoCAD for Mac 2015 appears to be the most stable and fastest version so far, while adding a number of new features and taking care of several bugs and other issues.

AutoCAD for Mac 2015 launches today, and is available not only in the usual perpetual license program, but also Autodesk's subscription plans designed to lower the barrier to entry for those looking to take their first steps into the company's CAD software.

Parasprite
PSA: Autocad (and other software) is free* for postsecondary students with a .edu email address. Full versions.**

*You know, free as in for noncommerical use.
**Note that for this version they mark all files saved with this as being education versions permanently, whether they were created with other versions or not. In other words, do not open important business projects with this unless you want them marked as noncommercial use only.

Crosscreek
I would have used Mac all along if I could have run AutoCad on it.
Rating: 7 Votes

Their pricing model is ridiculous.


Whether or not the price is right is ultimately determined by the purchaser. Businesses that use this software to help generate profit may see price as reasonable. Of course everyone wants to pay less, but it isn't always the bargain we think. Similarly, people say Mac Pros are ridiculously priced. If the MP, like AutoCAD, puts food on your table and a roof over your head, doesn't the value outweigh the cost? From a business perspective, I'd consider them both an investment. In the majority of cases I'm pretty sure the ROI far outweighs the expense.
Rating: 6 Votes

My Father, an architect, uses AutoCAD in Windows. My brother, also an architect, uses Sketchup on his Mac. I don't have any expertise to make a comment on the difference, but pricing seemed to be in favor of Sketchup. I wonder if this changes anything.


Sketchup is NOT an alternative to AutoCAD...
(For 2d drawings)

Autodesk should be concentrating on getting Revit over to Mac since over 70% of the top 100 architecture firms use it, also given the growth and requirement to use BIM
Rating: 6 Votes

"...nearly equal to its Windows counterpart..."

As usual then, not really possible to switch to the mac version, at least not for power users.


Depends on the features you need. A lot of the scripting hasn't transferred over (like LISP), but VBasic & .Net scripting can't be transferred for obvious reasons. Some of the old express tools functionality has been included with the core features. It's the old software adage that almost all of your customers can be satisfied with 80% of the features, it's the remaining 20% that is difficult because it varies so wildly based on the customer.


The market isn't that limited. Frankly AutoCAD has grown into a very large company on the back of AutoCad. That isn't a bad thing as they now offer a wide array of products. The problem is 2 D drafting is a mature industry. It would really help adoption if AutoCAD was more rationally priced, especially the LT version.

We're talking about this on MacRumors where people don't hesitate to buy a new iPhone, iPad or Mac every year just because. Yet charging (a considerable sum of) money for software is suddenly unreasonable.
Rating: 4 Votes

Compared to windows AutoCAD, windows beat the OSX version hands down...oh and we need to be able to run 3ds Max natively. Demand is high, get with it Autodesk.
Rating: 3 Votes

Their pricing model is ridiculous.

pancakedrawer
Somehow, despite the more ergonomic shortcuts, I find the mac versions of 3D software such as Rhino and ArchiCAD less efficient to use than their windows counterparts. It was also disappointing that Autodesk didn't focus on Revit for the Mac, given the rise in BIM.
Luckily my rMBP is fast enough to run parallels for almost all of my 3D modelling.
Rating: 2 Votes
[ Read All Comments ]