Many Retailers Hesitant About Offering Support for Apple Pay

Though Apple is launching Apple Pay with a number of high-profile retail partners including Macy's, Disney, Whole Foods, Sephora, Walgreens, and Staples, among others, there's a long list of retailers who have decided not to offer Apple Pay in their stores.

Walmart and Best Buy, for example, have been two high-profile companies that have vocally opted out, and The Daily Dot has compiled a list of several other retail outlets that have no current plans to support Apple Pay. Clothing store H&M said that it has no plans to accept Apple Pay at this time, as did high-end retailer Coach. 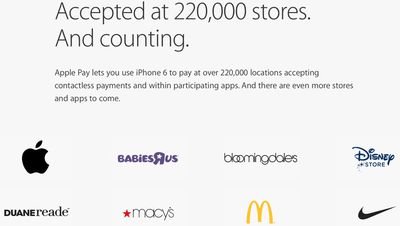 A Bed, Bath & Beyond spokesperson said the company was "unable to participate," while a spokesperson for retailer Belk also said "we don't have the capability to accept Apple Pay right now," suggesting the store has not adopted payment systems with NFC capabilities.

Sears, Kmart, and Publix have also said they won't be accepting Apple Pay, as has gas company BP, though BP stations may be able to accept Apple Pay in 2016.

BP spokesperson Scott Dean said the company "won't be in a position to do this in 2014, but we're working with our marketers (BP gas stations are independently owned and operated) to upgrade our retail site technology progressively over the next two years and as part of those upgrades we will be setting ourselves up to be ready for mobile payments."

Some fast food restaurants aren't on board yet either, including Pizza Hut and Chipotle, while others, like KFC, are "looking into the prospect of accepting Apple Pay" but have no timetable for support.

It's important to note that even if a retailer does not explicitly state that it offers support for Apple Pay, the Apple Pay payments system will work in any retail store that allows contactless payments via NFC. Many modern point-of-sale (PoS) systems come with NFC capabilities, and Apple is counting on regulatory changes that will require merchants to update their payment hardware over the course of the next year.

As of October 2015, merchants that do not offer support for EMV credit cards (cards that contain integrated circuits to prevent fraud) will assume responsibility for any fraudulent transactions that take place. Normally, banks assume liability, so it is in the best interest of retailers to deploy these new payment processing systems. EMV cards, or chip cards, are already used in many other countries around the world.

Though many merchants will be upgrading to new payment systems, many of which offer NFC, these upgrades take time and it may be several months before retailers decide whether or not to adopt NFC to allow them to process payments through Apple Pay.

The list of merchants not on board with Apple Pay is considerable, but contactless payments are growing in popularity and with the help of Apple Pay, the adoption of NFC systems may accelerate even faster. According to Apple, more than 220,000 retail stores across the United States will be able to accept Apple Pay.

Apple Pay is expected to roll out in October as an update to iOS 8. iOS 8.1, with hidden Apple Pay settings, has already been seeded to developers for testing.

Just roll it out in the UK, we are ready. We have the NFC terminals. Bring it. Let the US see what they are missing. Let them see how its done. Make them feel inadequate. They don't like that feeling. It'll make them rush to implement it quicker.
Score: 59 Votes (Like | Disagree)

tod
Sears and Kmart will be dead and gone within two years, so it hardly matters...
Score: 57 Votes (Like | Disagree)

jlake02
If I have the choice between 2 very similar businesses, I will opt for the one that uses :apple:Pay. Bring on the future, America. Get out of the plastic past!

John.B
Because, really, why wouldn't we want to continue to have retail credit card data security breaches, like the one at DQ that just came to light (http://online.wsj.com/articles/international-dairy-queen-confirms-data-breach-1412891919)?

Why should Home Depot and Target get to have all the fun?

/sarcasm (Is this even necessary?)
Score: 29 Votes (Like | Disagree)

they must be android users.


except that android already has NFC for most devices so that wouldn't really make sense.
Score: 20 Votes (Like | Disagree)
Read All Comments