Apple is expected to hold an event on Thursday, October 16, where it will unveil the second-generation iPad Air, Retina iMacs, and OS X Yosemite. Ahead of that event, The Michael Report claims to have acquired "pictures and illustrations" of the iPad Air 2 from "sources within Apple," although it has opted not to share such evidence publicly.

While the site goes into significant detail about the iPad Air 2, it appears to be largely aggregating existing rumors about the device, adding little new information. Overall, the site claims the iPad Air 2 will have a slightly thinner body, something that has been claimed in previous reports and perhaps enabled by a new integrated display, as shown in early part leaks from April.

Along with its display prediction, The Michael Report details several minor design changes that have previously been seen in an iPad Air 2 dummy unit, which MacRumors also has had on hand for several months, suggesting the site may be basing much of its information off of a replica device rather than actual information.

For example, the site suggests that the second-generation iPad Air 2 will do away with the mute switch to "achieve [a] thinner profile," but that is likely an erroneous conclusion based on the unfinished design of the circulating dummy units rather than a legitimate leak as claimed by the site. On the iPad Air 2 dummy units, there is indeed a hole where the mute switch would normally be located. The Michael Report suggests this may be a microphone, but more likely, it is a pilot hole marking the location for the mute switch. Similar pilot holes have been seen for larger physical features such as SIM card trays in other dummy units and unfinished prototypes. 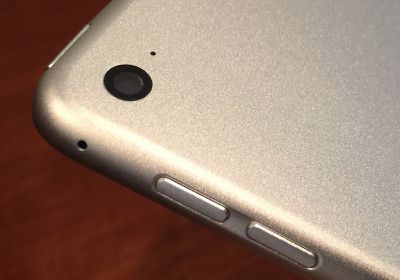 The mute/vibration switch is completely gone in the new redesign, with sources from within Apple telling us that it was a necessary move to achieve the thinner profile of the new tablets. [...]

Other predictions from The Michael Report include recessed volume buttons, a redesigned speaker grille, and a microphone hole relocated near the rear camera, all design elements that have been previously seen in the iPad Air 2 mockups. When examining the dummy device, MacRumors did notice that the recessed volume buttons and hole for the mute switch had been moved higher on the device than on the original iPad Air, nearly in line with the rear camera. The reason for this design change is unclear.

Echoing other previous rumors, the site's predictions include an upgraded A8 processor, an 8-megapixel camera, support for Touch ID and Apple Pay, and 2 GB of RAM, which has not been confirmed but is a rumored upgrade to support split-screen multitasking.

Many of The Michael Report's predictions are based on previous rumors and are likely to be accurate, but some of the more unsubstantiated claims, like 2 GB of RAM and the lack of a mute switch are somewhat more nebulous.

Another image of the iPad Air 2 mockup with Touch ID
Ahead of the launch of the iPhone 6, The Michael Report came out with a similar roundup that it claimed was based on contact with Apple employees, but several of the predictions (seemingly based on rumors circulating at the time) turned out to be wrong, including "a waterproof and dust-proof enhanced sapphire glass screen" and an "iPhone 6L" nomenclature, among other things.

bpeeps
The title of this article is great.
Score: 21 Votes (Like | Disagree)

JonneyGee
You mean rumors can sometimes be false? :eek:
Score: 8 Votes (Like | Disagree)

The mute/vibration switch is completely gone in the new redesign, with sources from within Apple telling us that it was a necessary move to achieve the thinner profile of the new tablets.

Can't wait to see the first wave of idiots trying to bend their brand new iPads because "Apple is too worried about making thin devices". Most electronics are not meant to be tortured like that
Score: 5 Votes (Like | Disagree)

tekilla
It basically reads like you've posted this article purely to discredit "The Michael Report" (whatever that is). Seems petty and surprised Macrumors has stooped to name calling.
Score: 5 Votes (Like | Disagree)

Hakone
It'd be interesting if it had recessed buttons and a protruding camera lens. :D
Score: 5 Votes (Like | Disagree)
Read All Comments