Following yesterday's media event where Apple introduced the iPhone 6, the iPhone 6 Plus, and its much-anticipated wearable device, members of the media were invited to go hands-on with the devices.

Yesterday, we published hands-on impressions of the Apple Watch from various tech-related sites, but this year's event also had top fashion editors and bloggers in attendance, who also published their initial thoughts on the Watch. We've gathered up some of their perspectives below, giving an overall picture of how the device was received in the fashion world.

Fashion magazine and blog InStyle said the Apple Watch was "well worth the wait," and published a list of "5 Reasons Why Fashionistas Will Swoon Over Apple Watch." The piece pointed towards the device's multitude of styles, its customization options, and its ability to send emojis, drawings, and heartbeats. 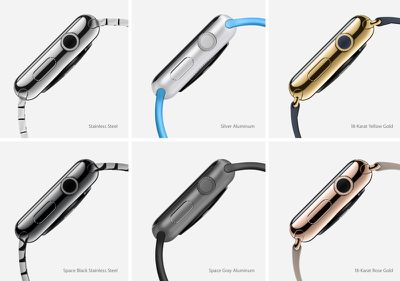 Most Apple Watch faces are extremely customizable. Meaning, you can change colors, choose design elements, and add functionality. You can have a traditional analog or a modern digitized face--plus you can choose the screen image.

Well-known fashion magazine Vogue was also impressed with the Apple Watch, highlighting its design and the "extra magic" of the Digital Crown control. The magazine said the Apple Watch is "a watch that looks like a watch" and that its "visual appeal is almost retrofitted to the traditional language of the analog Swiss-made timepiece."

British Vogue editor Alexandra Shulman also told Reuters in an interview that the Watch is "immaculate in terms of how fashion meets function," and said "The issue is really about how much people want to wear something so clear, essentially an amazing gadget."

Roseanne Morrison, fashion director for The Doneger Group, told Reuters that the Apple Watch was unimpressive. "It's not pretty. It's very future techno as opposed to feminine sexy." Meanwhile, fashion-oriented site Cool Hunting disagreed, calling it "lovely and clever," and saying it "marries fashion and technology, wellness and data, and beautifully integrates the humanity of touch."

The tactile touches of the watch extend beyond the device itself--the Leather Loop strap option, for example, has magnets in each of its ribs so that the act of securing the strap feels like a luxurious zipper and consequently has an extremely secure closure. And the link bracelet has a butterfly closure that seamlessly folds into itself unlike anything we've seen on a watch band before.

Beyond fashion, leading wristwatch site Hodinkee had an opportunity to go hands-on with the Apple Watch, giving an in-depth look at the device from a design perspective, and the resulting overview is well worth a read. The site believes the Watch could pose a threat to existing brands, as "Apple got more details right on their watch than the vast majority of Swiss and Asian brands do with similarly priced watches."

The overall level of design in the Apple Watch simply blows away anything -- digital or analog -- in the watch space at $350. There is nothing that comes close to the fluidity, attention to detail, or simple build quality found on the Apple Watch in this price bracket.

Hodinkee also focuses on an aspect of the Apple Watch that many sites overlooked -- the bands -- which it says Apple "NAILED."

...the attention to detail on the straps and bracelets themselves is downright incredible, and when I mentioned above that nothing comes close in this price range, it is very visible when talking about straps.

According to the site, the closure of the Sports watch strap is impressive, and the leather of the leather strap is "super soft, super high quality."The metal link bracelet is "sizable with just your own hands," the "loop" style bracelet is "just fantastic" and the Milanese bracelet is said to be comfortable. "I promise you not a single other tech company in the world would've spent the time to make this admittedly outdated looking option," reads the overview.

Hodinkee also points out a few flaws with the device, including the fact that it doesn't fit under a shirt cuff because of its bulk, and that it is "not as cool as a mechanical watch, to real people."

Introduced yesterday, Apple's Watch is available in two separate sizes with an array of different bands and casing options. Pricing on the device will start at $349, and it will be available to the public in early 2015.

DarkCole
I actually like the design, it'll only get better in later iterations though.
Score: 30 Votes (Like | Disagree)


Yeah, instead we really should be listening to what Hustler1337 has to say. Thanks, anonymous internet forum poster!
Score: 29 Votes (Like | Disagree)

MartinAppleGuy
Super cheap for what it is in my opinion.
Score: 29 Votes (Like | Disagree)


no its water resistant. As in you can wash your hands with it on but you aren't going surfing with it
Score: 28 Votes (Like | Disagree)

tbrand7
Looks like Jony Ive isn't such a bad designer after all.... I think the pictures they showed were very misleading. Its really only fair to judge it after you've played with it in person.
Score: 22 Votes (Like | Disagree)
Read All Comments