iPhone 6 and 6 Plus Top Most Benchmarks and Battery Tests, While 6 Plus Lags in Graphics 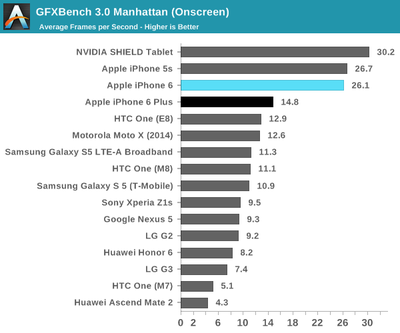 In in GPU benchmarks, we generally see a pretty solid lead over the competition for the iPhone 6/A8. It's seems quite clear that there is a significant impact to GPU performance in the iPhone 6 Plus due to the 2208x1242 resolution that all content is rendered at. It seems that this is necessary though, as the rendering system for iOS cannot easily adapt to arbitrary resolutions and display sizes.

Apple introduced the iPhone 6 and 6 Plus during its recent September press event and launched the phones on September 19. The two handsets include Apple's new A8 processor, M8 motion co-processor, 8-megapixel iSight camera, faster 802.11a/b/g/n/ac Wi‑Fi and NFC. Demand for the two phones was high with Apple selling 10 million iPhone 6 and 6 Plus units in the first weekend of sales.

monaarts
But, but, but my Galaxy S5 has a quad core processor that runs circles around dual core processors!!! :mad:
Score: 48 Votes (Like | Disagree)

Apple_Robert
Benchmark scores matter to a select few people. What Apple counts on, and what most people care about, is having a good experience using the phone.
Score: 24 Votes (Like | Disagree)

pedromcm.pm
I'm going to get some toilet paper and take it to south korea. With the awesome sales and this, they will **** themselves.

Keep your declining Samsung. Let's see how many quarters in a row! My bet? 24.
Score: 19 Votes (Like | Disagree)

Thursday May 13, 2021 10:32 pm PDT by Sami Fathi
A new rumor suggests that Apple will announce the third-generation AirPods and the recently rumored HiFi, or high-fidelity Apple Music tier, on Tuesday, May 18, via a press release on its website. The new rumor comes from Apple YouTuber Luke Miani who shared the alleged exclusive news with the AppleTrack website. According to the YouTuber, Apple plans to release the next-generation AirPods...
Read Full Article • 146 comments