'iPhone 6' Case Giveaway and Other Prizes from MacRumors

The iPhone 6 is expected to be announced on September 9th, 2014 with an Apple Media event. The actual launch will likely take place a couple of weeks later.

Some of the first rumors of any new Apple iPhone seems to come from the case manufacturers. There's a huge financial incentive for case manufacturers to be early to market with case designs for a new iPhone. The first leaked schematics for the iPhone 6 were published in March, 2014 and the first cases based on the designs started appearing shortly thereafter.

These case-design leaks aren't always correct, but this time there have been part leaks as well. Our iPhone 6 roundup goes into great detail about what we know so far. 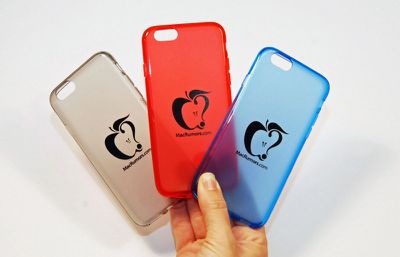 During our early iPhone 6 research, we obtained a batch of 200 rumored 4.7" iPhone 6 cases with our logo on it. We thought they might be useful on day one of iPhone 6 launch, or could simply serve as a MacRumors souvenir if the specs turn out to be not-quite-right. So, we're giving away 200 4.7" iPhone 6 cases to 200 of our mailing list members selected at random. To be clear, these cases might not even fit the real iPhone 6-- but that's part of the appeal. The case colors will be distributed at random, but possibilities include red, blue, grey, and frosted clear.

We'll be giving out other prizes over time to our mailing list subscribers. Official rules are available here. For this initial prize, we have to limit it to U.S. mailing addresses only, due to the cost of shipping 200 items internationally. iPhone 6 case giveaway contest deadline is midnight (Eastern) on the evening of Thursday, August 21st 2014. Winners will then be picked and mailed their cases, hopefully in time for September 9th.

The case giveaway is over, but future giveaways are planned.

If you are already a member of our mailing list, you still have to fill out this entry form (and check the agree checkbox) to get entered. You won't be added to our mailing list twice.

iPhone7s
Wow they are spectacularly ugly!
Score: 20 Votes (Like | Disagree)

arian19
News and rumors you care about (and the occasional iPhone case)
Score: 12 Votes (Like | Disagree)

Didn't you mother's teach you if you don't have anything nice to say, don't say anything at all? Why do you have to take something nice and **** all over it? If it's not for you, move on.

Yes, I've been reading MacRumors for a long time but signed today so I could finally get it off my chest. You sound like a bunch of spoiled bratty children. Grow up.

By the Way, Thanks for the offering MacRumors.
Score: 5 Votes (Like | Disagree)

wait, of course: duct-tape i6 cases
Score: 5 Votes (Like | Disagree)
Read All Comments