Apple's iPhone 6 could feature Sony's Exmor IMX220 camera sensor, according to a post on Chinese Sony enthusiast forum Digi-Wo (Google Translate, via G for Games). The Exmor IMX220 features a 13-megapixel, 1/2.3'' sensor and can record videos in 1080p. The sensor would also be a sizable improvement over the camera currently in the iPhone 5s, which uses an 8-megapixel, 1/3.2'' sensor. 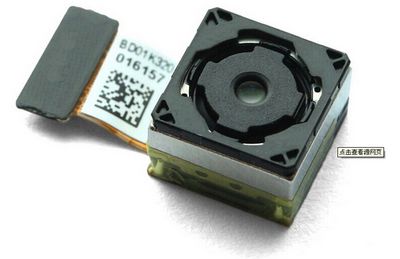 Sony's Exmor IMX220 camera sensor (via Alibaba)
Past rumors have suggested that the iPhone 6 will retain the same 8-megapixel sensor found in the iPhone 5s, with Apple instead choosing to offer improved image stabilization for more clear photos. A report last month also noted that an optical image stabilization system will be exclusively featured in the larger 5.5-inch iPhone 6, while the smaller 4.7-inch version utilizes an improved lens module.

Notably however, the iPhone 4S, iPhone 5, and iPhone 5s have used incremental versions of Sony's IMX145 sensor, as Apple could choose implement a new sensor from the company for the iPhone 6. Sony is also expected to use a 20-megapixel version of the IMX220 in its Sony Xperia Z3 flagship device that is slated to ship later this year.

While Digi-Wo does not have a track record with Apple-related rumors, the website has offered accurate information on past Sony products before their release, and recently offered leaked photos of the Xperia Z3.

Apple's iPhone 6 is expected to be announced this fall at a special media event. The device is expected to come in two sizes of 4.7 and 5.5-inches, although it is not known if the larger sized iPhone 6 will ship alongside the smaller version. In addition to an improved camera, the iPhone 6 will feature a thinner profile, a faster A8 processor, and Apple's new iOS 8 mobile operating system.

I hope everyone realises this and does not fall into the trap that 13MP is always better than 8MP. There's a lot more to it than that.
Score: 17 Votes (Like | Disagree)

kemal
I would rather have a 6MP sensor with better dynamic range.
Score: 15 Votes (Like | Disagree)

SchneiderMan
I bet Sony makes more money selling sensors to Apple than selling its own smartphones.
Score: 12 Votes (Like | Disagree)

So in other words, worse than the S5 camera. Less MP, no 4K recording....they may as well just stay with the tried and true 8MP they've been using for centuries then.

The sensor in the Samsung S5 is 1/2.6" which is smaller than the Exmor IMX220 (1/2.3") so you will get better quality pictures from the new iPhone camera if this is the actual sensor that they are using. See my attachment.

Plan to do a lot of big shot projects in 4K that hardly any device including most peoples existing TV can take full advantage of? Another feature to yet again say they did it before Apple.
Score: 9 Votes (Like | Disagree)
Read All Comments