Construction at Apple's Spaceship campus is continuing at a rapid pace, according to new images posted to Twitter by KCBS news and traffic reporter Ron Cervi. Cervi has been taking aerial shots of the campus to track construction progress for the last several months.

In the most recent set of images, the perimeter walls that will house the foundation of the building appears to be growing closer to completion, indicating a significant amount of construction has taken place since June, when the wall first started going up. Cervi also mentions "underground tunnels" in one tweet, referring to deep furrows in the dirt. 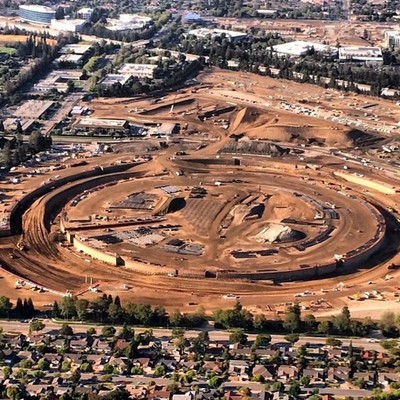 Pruneridge Avenue, the road that runs through the campus, has remained closed since last month, and traffic in Cupertino around the campus continues to be somewhat congested. Apple has closed off several sidewalks in the area and a large green privacy fence keeps the entire area hidden from view at street level.

Said to be the "most energy efficient building of its kind," Apple's new campus will be powered by 100 percent renewable energy and populated with more than 7,000 trees.

Apple hopes to finish the first phase of construction on the campus in 2016.

Yvan256
It would have been nice if someone had set up a camera somewhere to take a photo every day at noon, to be able to build a time-lapse video once it's completed.
Score: 16 Votes (Like | Disagree)

Jeez, are we gonna see a post everytime the wall goes up by a couple feet? Roof? some grass being laid down?


Jeez, are we going to have some high horse commenter such as yourself on every single post?

It would have been nice if someone had set up a camera somewhere to take a photo every day at noon, to be able to build a time-lapse video once it's completed.


Guaranteed Apple has already done this. It'll appear in one of their videos for WWDC or similar.
Score: 7 Votes (Like | Disagree)

CrazyForApple
I would love to live in one of those houses right there next to it
Score: 7 Votes (Like | Disagree)

The Leafs Fan
Hey is there a down vote button now? I'm seeing posts with negative ratings but I cannot find the button...
Score: 6 Votes (Like | Disagree)

Why? Right now you can't see anything due to the wall surrounding the property.

Also there are enough trees in place that you still won't see much when the wall comes down.

I wouldn't care what it looks like now but since I'm a huge Apple fan. It would be awesome to live right next to it's giant campus.
Score: 6 Votes (Like | Disagree)
Read All Comments