Available in newer devices like the iPhone 5s, the iPad Air, and the Retina iPad mini, the M7 "motion coprocessor" functions alongside the A7 chip in those devices, measuring accelerometer, gyroscope, and compass data for enhanced fitness tracking capabilities.

As noted by 9to5Mac the Health app's "Steps" section now tallies the number of steps a user has taken as measured by the iPhone 5s. Users accessing the Health app today will be able to access a full week's worth of data on their devices.

The M7 has been leveraged by several third-party app developers, such as Nike and Strava, but this is the first time the data has been made available directly via Apple's own Health app and it is also the first real data the Health app is able to display. 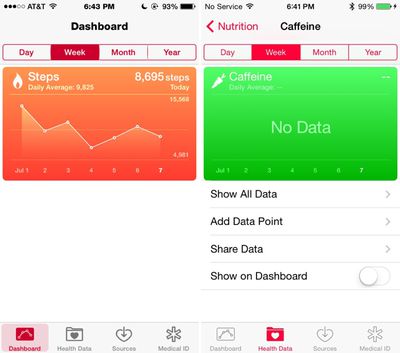 The new Steps and Caffeine options in Health, with image on the left provided by a MacRumors forum user.
Along with M7 integration, the Health app also has a new "Caffeine" section in the Nutrition portion of the Health Data tab. This appears to track how much caffeine is consumed and will likely integrate with third-party caffeine tracking apps such as UP Coffee from Jawbone, which lets users track the amount of coffee, tea, and other caffeinated beverages that are consumed on a daily basis.

At the current point in time, the Health app is rather limited, but by the time iOS 8 is released, dozens of device manufacturers and app developers will likely have built HealthKit into their apps, allowing the Health app to aggregate data from multiple sources into one easy-to-access spot. Health is also rumored to be heavily tied to Apple's upcoming health-tracking wearable device, the iWatch.

As described by Apple, Health aims to be a one-stop dashboard for health and fitness data, tracking metrics measured by various devices and apps, including heart rate, food consumed, cholesterol, sleep quality, and more. Apple's iOS 8 Health page says "It might just be the beginning of a health revolution."

iOS 8 is currently available only to registered developers and will likely be released to the public in the fall, after several more beta iterations to refine the look and feel of the operating system.

joshwenke
Anyone care to explain why "Caffeine" has a carrot icon??
Score: 10 Votes (Like | Disagree)

braddick
I'm running out of excuses not to exercise.
:(
Score: 10 Votes (Like | Disagree)

Anyone care to explain why "Caffeine" has a carrot icon??


Because in the App all food based items are represented by a carrot.
Score: 6 Votes (Like | Disagree)

johngordon
UI is often subjective, but that white on fluorescent green is verging on the unreadable. Its the same as they have in Calendar - I literally can't believe they don't seem to have noticed that, or seem to care. (And yes, I know this is beta, but Calendar isn't.)
Score: 5 Votes (Like | Disagree)

I love how MR can't fix up this drivel that appears over and over again "iOS 8 is currently available only to registered developers and will likely be released to the public in the fall, after several more beta iterations to refine the look and feel of the operating system."

What it should say it this "iOS 8 is currently available only to registered developers and will be released to the public in September alongside the iPhone 6, after several more beta iterations to eliminate bugs, finish key features, and make minor tweaks to the look and feel of the operating system."


MR plays it very safe. A rumor is a rumor. Apple has not confirmed ios 8 coming in September,her nor the iPhone 6. MR isn't going to shoot themselves in the foot by saying rumors are facts, no matter how certain you are or how many leaks there are.
Score: 4 Votes (Like | Disagree)
Read All Comments