Apple today released the third beta of iOS 8 to developers, three weeks after releasing the second beta update and more than a month since unveiling the new operating system at the Worldwide Developers Conference.

The update, build number 12A4318c, is available through Apple's over-the-air updating system on iOS devices and can also be downloaded via the iOS Dev Center. Apple has also released a new beta version of Find My iPhone, a brand new iOS 8 version of Find My Friends, a new Apple TV beta, Xcode 6 beta 3, and updates to Swift, the programming language the company introduced at WWDC. 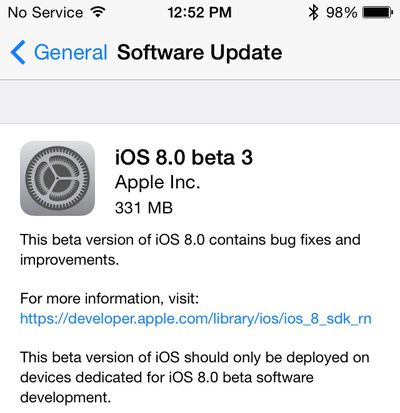 The third iOS 8 beta includes several tweaks to the operating system, like new options for iCloud Drive, a new Settings toggle for Handoff, and a new option to enable or disable QuickType. There's also been some changes to the look of the weather app and a few new simple wallpapers. For a full list of the changes to iOS 8 in beta 3, make sure to check out our Beta 3 Tidbits post.

A June report suggested iOS 8 beta 3 would be released on Tuesday, July 8, but it appears the beta has come a day early. Today's update comes just after Apple announced plans to wipe all CloudKit data for the iOS and Yosemite betas, including data from iCloud Drive, iCloud Photo Library, and Mail Drop.

iOS 8 is currently only available to developers, but it is expected to be released to the public this fall after several beta iterations. Based on past history, iOS 8 will likely be launched alongside new iPhones, and possibly the much-rumored iWatch.

Dayum, this is huge :eek:


This is terrible! Beta 3 has made my phone completely useless! Apple should do better than this, I'm switching to Android.

ZacNicholson
hopefully 10.10 dp 3 is coming out today too
Score: 6 Votes (Like | Disagree)

Twimfy
Thanks heavens. iOS 8 Beta 2 is the buggiest I've ever experienced since the iOS 3 beta came out all those moons ago.

Hopefully this will be far more stable.
Score: 4 Votes (Like | Disagree)
Read All Comments