First announced at Apple's September 10 media event alongside the iPhone 5s and its M7 motion coprocessor, the Nike+ Move app has launched in the App Store, allowing iPhone 5s users to get enhanced statistics daily about their physical activity.

The new app was the first introduced to take advantage of the M7 coprocessor and new CoreMotion APIs in iOS 7, allowing it to track more reliable and accurate movement data in the background, even when the phone is asleep, while also conserving battery life. The app then takes all the movement data it gathers and converts it into NikeFuel, the fitness company's measuring unit for physical activities, and uses it to motivate a user to keep exercising. 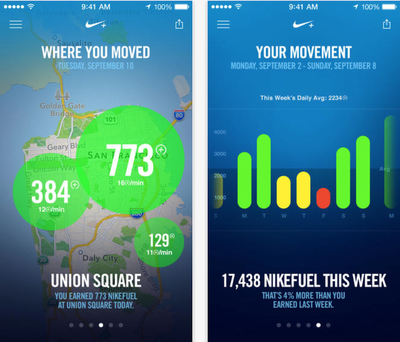 Nike+ Move offers insight into when you move, how you move and where you move - and lets you challenge your friends to see who moves more.

-Win the day by beating your NikeFuel average and watch your goal ring change from Red to Green.
- See when you are most active throughout the day and how you’re doing compared to yesterday.
- Move more often and win as many hours as you can throughout the day.
- See how you moved through the day with a breakdown of running, walking, and other movement.
- See where you're moving and where you move the most each day.
- Check out how you compare against your Game Center friends or other Nike+ Move users near you.

Nike+ Move is available only for the iPhone 5s in the App Store for free. [Direct Link]

I guess it's for nerds trying to get into shape. I dunno, I don't check any stats, and I'm healthy and quite fit, at least compared to other Americans. Sounds like they're trying to turn an imprecise science into data on a spreadsheet.


Good for you. No, really: congratulations, it's great that you're in good physical condition. It's pretty important, and a lot of people have trouble doing it. Perhaps that fact has escaped your attention?

Or perhaps it has, quite reasonably, escaped your attention that when most people (you know, the ones who AREN'T as awesome as you) are given a way to quantify how much exercise they are getting and the progress they're making, they are much more likely to stick to an exercise regimen, becoming much more reliable about putting in the exercise and much more likely to continue it longer. I can see why you wouldn't have noticed, since you don't need it, but it turns out that there are some great recent studies that tell you this.

But I could have told them that. Fifteen years ago, I decided to get in shape. I started by walking, and then worked up to jogging. And it was a horrible slog and I hated it and I never felt like I was making any progress. And then I got a heart rate monitor and pedometer (they were a bit cruder back then, mind you), and suddenly I could actually see my progress. I could see that I was able to run farther than I had been a month ago, and that my resting heartbeat was, on average, a couple of beats per minute lower than it was a year before. I could get a count of the approximate number of calories I was burning in a day, and compare that with my food intake. I could chart my progress, albeit on a tiny little watch screen (since there wasn't one that would interface with Macs at the time).

Shortly thereafter, I got a Walkman (ye gods, I feel old), later replaced by an iPod. And a couple years after that I received a GPS watch as a gift. These days I'm using an iPhone and a heart rate monitor strap that connects to it via bluetooth 4.0, plus a fitbit (although I'll probably just ditch that, with the M4 thing).

Result? Fifteen years later, I'm still in shape. The reason I stick to it is because I know that I'm actually accomplishing something. I know that I'm in good physical condition. When I skip a day of jogging, I can look at my stats and say, 'Meh, I did five days of jogging last week, plus a seven mile hike last weekend I can afford to take a day off this week' instead of stressing out about being a bad person because I didn't exercise that day, something that makes it more likely that you will just quit. (And as an added bonus, I can keep track of how many miles I put on my jogging shoes, so I can replace them at reasonable intervals.) I can chart out my rest heart rate (~55, currently not QUITE the best it has ever been but surprisingly close, seeing as I'm probably twice your age). If I wanted to, I could sit down and chart out how only getting six hours of sleep in a night effects my exercise patterns the next day, or for that matter how my exercise patterns affect my sleep. I haven't, at this point, but if I started having serious sleep issues I probably would. Because it'd be really good to know.

Basically, these kind of metrics make it more likely that more people will stay in shape, and help people understand their own bodies better. And they don't help just a little bit: the studies have been quite striking, and very consistent. Seems to me that, instead of deriding these things as 'for nerds trying to get in shape', you should be, well, a little more tolerant of other people's imperfections. Shall we say.
Score: 43 Votes (Like | Disagree)

I plan to get a copy of Nike+Move for my WoW avatar so I can keep track of how many miles he travels on a quest.
Score: 13 Votes (Like | Disagree)

Argus has had M7 integration for weeks now... Nike isn't the first

somethingelsefl
Can someone please explain to me why the average person would need to track this much data about their daily life? I understand exercise apps...but tracking how much I walk, sit, or stand...and then offering me incentive to do it again?

The M7 co-processor is awesome. But this (much like the "fit" bracelets that are coming out) seems to be just another thing that someone can obsess over, then post to Facebook.

Maybe I'm missing something. But this quote comes to mind when I see borderline excessive data tracking apps like this....

"We are drowning in information, but starved for knowledge."
--John Naisbitt
Score: 9 Votes (Like | Disagree)

Argus has had M7 integration for weeks now... Nike isn't the first

I believe the article meant that Nike was the first to be shown at the Apple iPhone event in September :)
Score: 8 Votes (Like | Disagree)

You run with your iPad in your pocket? :O

Can someone please explain to me why the average person would need to track this much data about their daily life? I understand exercise apps...but tracking how much I walk, sit, or stand...and then offering me incentive to do it again?

The M7 co-processor is awesome. But this (much like the "fit" bracelets that are coming out) seems to be just another thing that someone can obsess over, then post to Facebook.

Maybe I'm missing something. But this quote comes to mind when I see borderline excessive data tracking apps like this....

"We are drowning in information, but starved for knowledge."
--John Naisbitt

I guess it's for nerds trying to get into shape. I dunno, I don't check any stats, and I'm healthy and quite fit, at least compared to other Americans. Sounds like they're trying to turn an imprecise science into data on a spreadsheet.
Score: 6 Votes (Like | Disagree)
Read All Comments