Apple has been awarded a patent by the U.S. Patent and Trademark Office (via AppleInsider) that details a weightlifting tracker that could pair with a watch-like device to provide live progress-tracking to users, offering a potential scenario where Apple's highly-rumored iWatch could be used.

The patent details how a transmitter could attach itself to a weightlifting bar to count repetitions in real time. The transmitter itself is described as having a number of components, including an accelerometer, processor, Hall effect sensor, and display. While some scenarios describe the sensor as showing live information all by itself, a few note that the small beacons could transfer data to devices such as a watch or phone. 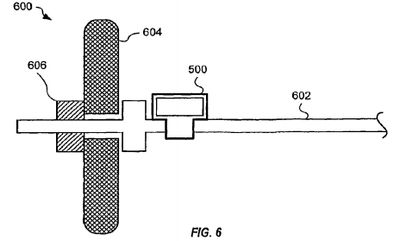 In one embodiment, display 512 is part of a watch (or a MP3 player or a cell phone) that may be seen when worn or used by the user when performing exercises; and measurements determined by processor are transmitted to the watch (or to the MP3 player or cell phone) for display.

In a situation where data is transferred to a watch, the patent notes that the watch's housing could include a processor to store data and inform the user of repetitions for workouts over time. This would allow the device to breakdown a user's workout with the use of multiple sensors, even giving information about the body bar or other equipment used.

Whether Apple integrates the technology described in the patent into a specific product remains to be seen. However, recent reports surrounding the iWatch have described the device as having a multitude of biometric sensors to track a number of health-related metrics, including activity levels.

Furthermore, it is likely that the iWatch will integrate with iOS 8's recently introduced Health app, which provides an easy to read dashboard of health and fitness data that can be pulled from different sources. Apple also debuted a new TV ad called "Strength" last week that focused on fitness accessories and apps.

Apple's iWatch is expected to launch later this year, with a recent report stating that the company is aiming for an October unveiling and release date.

Come on guys, samsung will be frist!!!


Just like Samsung, you rushed to make a comment and made a mistake in the process. :p

On topic, seems like Apple has thought of everything fitness-wise. I wonder if they got the idea from Nike.
Score: 17 Votes (Like | Disagree)

x-evil-x
usually weight lifters(at least the ones willing to purchase a device to help keep track of things) doesn't need a count helper. Its burnt into my brain the way i do things in the gym i don't see a device helping with that. Now keeping track of heart rate is good for me and some sort of calorie counter but not rep count thats a little ridiculous. Especially for the addicted to weightlifting people like me.
Score: 6 Votes (Like | Disagree)

mrxak
This thing wouldn't have to be just a rep counter. It could also detect how quickly you're doing the reps. Are you using inertia to cheat and powering through, or are you going slow and steady for maximum benefit? Depending on what exactly the sensors are and how good the software is, this could be very useful indeed, even for those who can count :p.
Score: 5 Votes (Like | Disagree)

Thats what Im talking about!!! Bring it Apple. May or may not ever see this product come to shelves, but as a serious weightroom junkie, this shows me that Apple GETS true health tracking.


A true weight junkie does NOT care about gadgets like this. Chalk and a barbell is all we need :P
Score: 5 Votes (Like | Disagree)

juanm
One day, not so far away, we won't be able to pee without the help of an app telling us the exact the direction of the wind to make sure we're not against the wind.
Score: 4 Votes (Like | Disagree)

mainstreetmark
I demand a rendering!
Score: 4 Votes (Like | Disagree)
Read All Comments

Sunday September 25, 2022 6:50 am PDT by Sami Fathi
Apple may decide to release its remaining products for 2022, which include updated iPad Pro, Mac mini, and 14-inch and 16-inch MacBook Pro models, through press releases on its website rather than a digital event, according to Bloomberg's Mark Gurman. In his latest Power On newsletter, Gurman said that Apple is currently "likely to release its remaining 2022 products via press releases,...
Read Full Article • 175 comments