A Look at 'Health' and 'HealthKit', Apple's New Health Initiative

Ahead of WWDC, perhaps one of the most hyped features for iOS 8 was "Healthbook," which was said to serve as a Passbook-style app that aggregated a variety of health-related information in a colorful card array.

While Apple did indeed announce a new health initiative and accompanying app, "Healthbook" turned out to be off the mark. The app is called simply "Health," and appears to differ a bit from how it was described in early rumors. According to Apple, Health is designed to be an "easy-to-read" dashboard of health and fitness data, which can pull in information from several different sources. "It might just be the beginning of a health revolution," reads Apple's iOS 8 Health page. 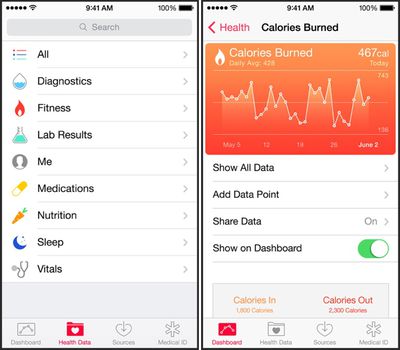 Heart rate, calories burned, blood sugar, cholesterol -- your health and fitness apps are great at collecting all that data. The new Health app puts that data in one place, accessible with a tap, giving you a clear and current overview of your health.

The Health app keeps track of several different health metrics measured by various devices, including heart rate, calories, cholesterol, and more. It also features an "emergency card" that includes all of a user's important health information, including blood type and allergies, which can be displayed directly on the lock screen of an iOS device.

As can be seen in screenshots of the app, it aggregates information into a selection of categories such as Diagnostics, Fitness, Lab Results, Medications, Nutrition, Sleep, and Vitals. Many of these categories can also be displayed on a dashboard chart, giving users an at-a-glance view of their overall health.

Accompanying Health is the HealthKit tool for developers, which can be incorporated into both new and existing health and fitness apps to allow them to access the health data stored within the Health app. Users are able to choose exactly what's shared and can, potentially, choose to share data from a health-related app with a doctor. Apps can also be authorized to share information with each other. A nutrition app might share how many calories are consumed with a fitness app, for example.

According to Dr. John H. Noseworthy, CEO of the Mayo Clinic, Apple's HealthKit has the potential to "revolutionize how the health industry interacts with people." The Mayo Clinic is already working with Apple and HealthKit, creating an app that allows patients to monitor their blood pressure, sending alerts to doctors automatically.

Despite all of the focus on Apple's health related initiative before WWDC, the company spent very little time going over the Health app. It is likely we'll see an additional focus on Health in the coming months as it is likely to also integrate with Apple's much-rumored wearable device, the iWatch. Health and HealthKit, both part of iOS 8, are available to developers today with a public release of the operating system expected in the fall.


Stock prices never seem to rise much, or at all, after announcements, because the people in WS think just like you: If Apple doesn't introduce something absolutely game changing, they believe they're failing.

Fact is, Apple did present lots of awesome new things today, a lot of them which go towards developers, which in turn will be beneficial to users. It's just not as direct as "here's new features for you users".

Plus, surely a lot of these things will be expanded on a bit more with the introduction of the iPhone 6 (and iWatch?), such as the Health app.
Score: 23 Votes (Like | Disagree)

I really can't get you.
Feature-wise, this is the biggest keynote Apple has announced since the iPad. This is definitely a long-term play: it doesn't make as much fanfare as a new product, but this is huge! It's all about making ground for what's about to come; a simply brilliant move from Apple.
Honestly, you couldn't ask for more.
Score: 14 Votes (Like | Disagree)


Sorry but looking at one day performance is trolling. Apple shares have outperformed the market over the past 1-2 months. You are a buyer so it is understood that developer centric updates might not seem like innovation but Apple further entrenched users into its ecosystem with the improved continuity and a whole new generation of developers will be using Swift and create things for Apple they might not have otherwise. Admittedly these are longer range pursuits but lack of such investment into the R&D can have dire consequences for the company longer term. Just ask RIMM. As a shareholder you should be pleased and the hardware which most average folks salivate over will be forthcoming as per usual.
Score: 13 Votes (Like | Disagree)

chriscrk
I felt like they didn't talk much about it. I figure they'll make a bigger deal about it when releasing the iPhone 6 + iWatch later in the year. It'll become far more important.
Score: 11 Votes (Like | Disagree)