Pioneer announced earlier this year that its latest aftermarket NEX infotainment systems will be compatible with CarPlay, allowing customers to install the Apple technology in an existing automobile. The hardware requires only a firmware update that is expected to be available in "a few weeks", putting the company on or even slightly ahead of its original "early summer" schedule. 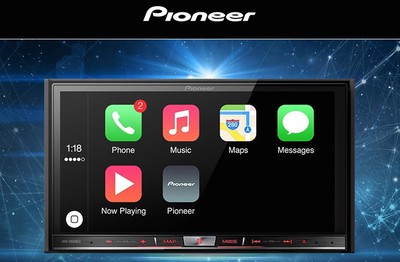 Pioneer was in San Francisco this week showcasing the technology, which provides drivers with an integrated experience for placing phone calls, using maps, listening to music and messaging via Siri. As noted by Macworld, demo cars included the high-end $1400 Pioneer AVH-8000NEX system, which contains an in-dash capacitive touchscreen that allows the driver to tap on the infotainment screen to interact with the CarPlay system. CarPlay also supports hands-free operation using Siri to control many of the available functions.


The current version of Apple's Carplay technology requires a Lightning cable connection between the iPhone and the receiver, limiting its usage to the iPhone 5, iPhone 5s and iPhone 5c. Rumored wireless support over Wi-Fi connection has not been confirmed by Apple, but even then the feature would require updated hardware for Pioneer, as the current NEX systems do not support Wi-Fi connectivity.

Pioneer is one of the first automobile electronics companies to offer an aftermarket CarPlay system to customers who don't want to purchase a new car in order to experience the feature. Alpine also announced its own series of aftermarket CarPlay receivers, but they are expected to arrive later this year.

HobeSoundDarryl
But before we put a $1400 touchscreen device into our car so that it can utilize a few of the apps of iOS, why not just buy a "whole" iPad or iPad mini and get that installed instead? At $1400, one could install 2-3 "whole" iPads so that passengers could use more than one screen for more than 1 purpose. I think this is cool and all but I have a hard time seeing the utility of $1400 for limited functionality vs. full functionality for as little as $399 (plus installation). A quick look around has iPad install kits for <$200.
Score: 8 Votes (Like | Disagree)

mikeyrko
I don't see where wireless is a huge deal if you are using it it's going to be wearing out your battery. At least this way it's charging.
Score: 5 Votes (Like | Disagree)

ipedro
How about a CarPlay mode directly on your iPhone or iPad? A possible iOS 8 feature?

Enabling a simplified UI like CarPlay directly on your device makes a lot of sense for people who car share instead of own.
Score: 4 Votes (Like | Disagree)

Why do we need this? Most modern cars have bluetooth streaming audio and navigation. Not sure what void this fills.


The millions of cars on the road that don't.
Score: 3 Votes (Like | Disagree)

jasonbro
I hope you guys know you could be waiting until next year and be stuck with an outdated head unit by the time carplay does get released.

Even hellen keller could see this is unfair and deceptive. Pioneer really stepped in it here.

I'm going to get my money back from pioneer. F this.

I ONLY bought this damn thing for carplay. I don't have a "bumping system" i just wanted carplay and the functionality that comes with it.
Score: 2 Votes (Like | Disagree)

wlossw
As far as I can tell there's no working car-play system a full year after it was announced... BS on APPLE for this one, and BS on their BS partners. :mad:
Score: 2 Votes (Like | Disagree)
Read All Comments