As part of iOS 7.1.1, released earlier today, Apple has implemented some minor changes to the iOS App Store to make it more clear which apps offer in-app purchases.

Apple has provided an "Offers In-App Purchases" disclosure on individual app detail pages since March of 2013, but now the App Store has been updated to include a small "In-App Purchases" notification for apps in Top Charts listings and on specific featured apps listings, such as in the "Great Free Games" category. 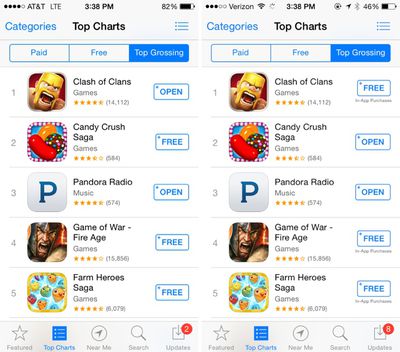 Apple's new in-app purchase warnings come following a January settlement with the FTC that saw Apple providing $32 million in refunds to parents whose children purchased unauthorized in-app items. Apple was also required to obtain express consent from consumers before billing them for an in-app purchase, a measure that it initially implemented with iOS 7.1.

In-app purchases have long been an issue for Apple, first landing the company in hot water with the FTC in 2011 after multiple parental complaints over children over-spending within apps. Apple has made many updates to its in-app purchase policies since that time, including requiring a separate passcode entry for initiating an in-app purchase and providing multiple notifications before a purchase is made.

Along with changes to the App Store, iOS 7.1.1 also includes improvements to Touch ID, Safari support for top-level domains such as .photo, and a few bug fixes. It can be downloaded over-the-air via the Software Update tool in the Settings menu.

Update 3:40 PM PT: Apple has notified developers that it is also adding new app content descriptions to the App Store.

You can now use the following descriptions: Medical/Treatment Information, Gambling and Contests, and Unrestricted Web Access (for apps that permit navigating and viewing web pages, for example with an embedded browser).

There are also new territory specific restrictions based on rating.

attila
There should be a "hide applications with IAPs" option in Parental Controls.
Score: 18 Votes (Like | Disagree)

6836838
I will mentally read this as 'Avoid' for any free Apps now. What a splendiferous feature. Well done Apple!
Score: 13 Votes (Like | Disagree)

kiantech
good! IAP have seriously become an epidemic in the app market. It's very greedy and makes it difficult for honest developers to succeed.
Score: 7 Votes (Like | Disagree)

nepalisherpa
At this point, it's probably cleaner to mark apps with no in-app purchases as "No In-App Purchases".
Score: 6 Votes (Like | Disagree)
Read All Comments