Along with several visual tweaks, CarPlay support, and Touch ID enhancements, iOS 7.1 also brought some changes to the way in-app purchases work. When making an in-app purchase for the first time after updating, users are notified via a pop-up window that additional in-app purchases can be made for 15 minutes without reentering a password.

The message also points to an existing option in the Settings menu that allows users to require a password with every in-app purchase. 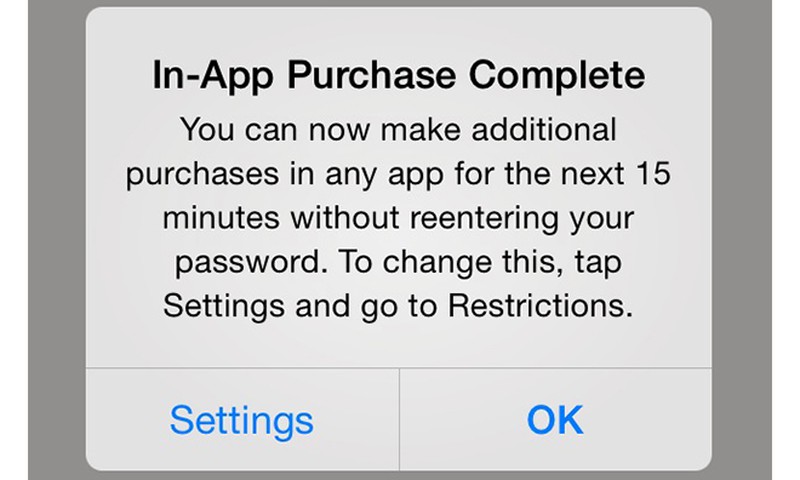 First uncovered by AppleInsider, the new message is likely the result of an agreement between Apple and the Federal Trade Commission, which required the company to implement measures to obtain express consent from consumers before billing them for an in-app purchase.

According to the consent decree that was initially signed in January, Apple had until March 31 to make the necessary changes, which may or may not be completed with the inclusion of the new message that requires users to acknowledge the possibility of additional in-app purchases.

While the pop-up is new, Apple has always had a 15-minute purchase window allowing additional in-app purchases to be made without reentering a password, a policy that landed the company in hot water in 2011 after parental complaints about children over-spending in apps sparked the FTC's interest.

Apple made some changes to in-app purchases following the complaints, requiring a separate password entry specifically for in-app purchases, but the company was still forced by the FTC to to provide full refunds to parents whose children purchased unauthorized in-app items.

In addition to implementing the required changes to the App Store, Apple will refund approximately $32 million to parents.

applesith
This is a win for lazy un-involved parents everywhere.
Score: 23 Votes (Like | Disagree)

Parents are still going complain because parents for others to do their jobs even if Apple improves the security for app purchase from minors. Lets make this simple stop letting your kids accessing your account and than the problem is easily solved.

I side with the parents on this. There was no warning of the 15 minute window previously, so after they enter their password allowing their child to download an app, how would they know it remains password free for 15 minutes?

I don't expect every parent to be technologically literate, and with Apple marketing themselves as family friendly, they should've tried harder to make the App Store family friendly ages ago.
Score: 22 Votes (Like | Disagree)

how would they know it remains password free for 15 minutes?


They wouldn't. There's nothing "lazy" or "uninvolved" about it. It's a dangerous default setting that needed to be explained (or changed).
Score: 15 Votes (Like | Disagree) 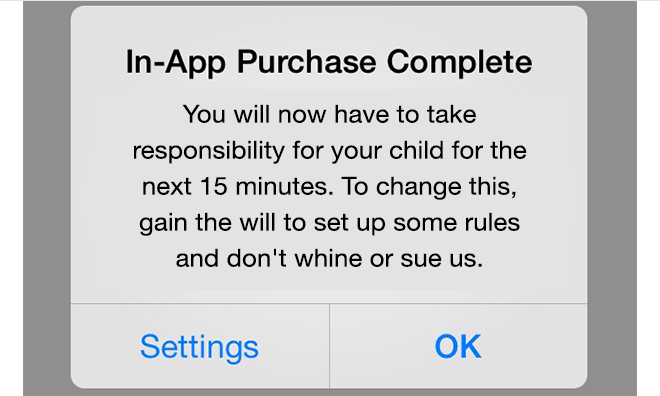 kdarling
One thing I can predict for certain:

All the self-centered childless posters (and my guess is a lot of them are kids themselves) yapping about how to parent, will change their tune not long after they grow up and have kids themselves.

They'll also be embarrassed looking back at what they said.

For it is a fact of life, that most everyone finds out that their elders were right after all :)
Score: 10 Votes (Like | Disagree)

Did it occur to you that maybe...I dunno...you could have...again, I dunno...talked to your kid and told him or her not to do anything but play the game?


Why should I have assumed he had an open 15 minute buying period without my consent??? Why would I talk to him about something I wasn't even aware he was able to do? :mad:

It's a stupid default setting that consumers were not made aware of. Apple really should change the default setting, but the new alert is better than what we had before.
Score: 10 Votes (Like | Disagree)
Read All Comments