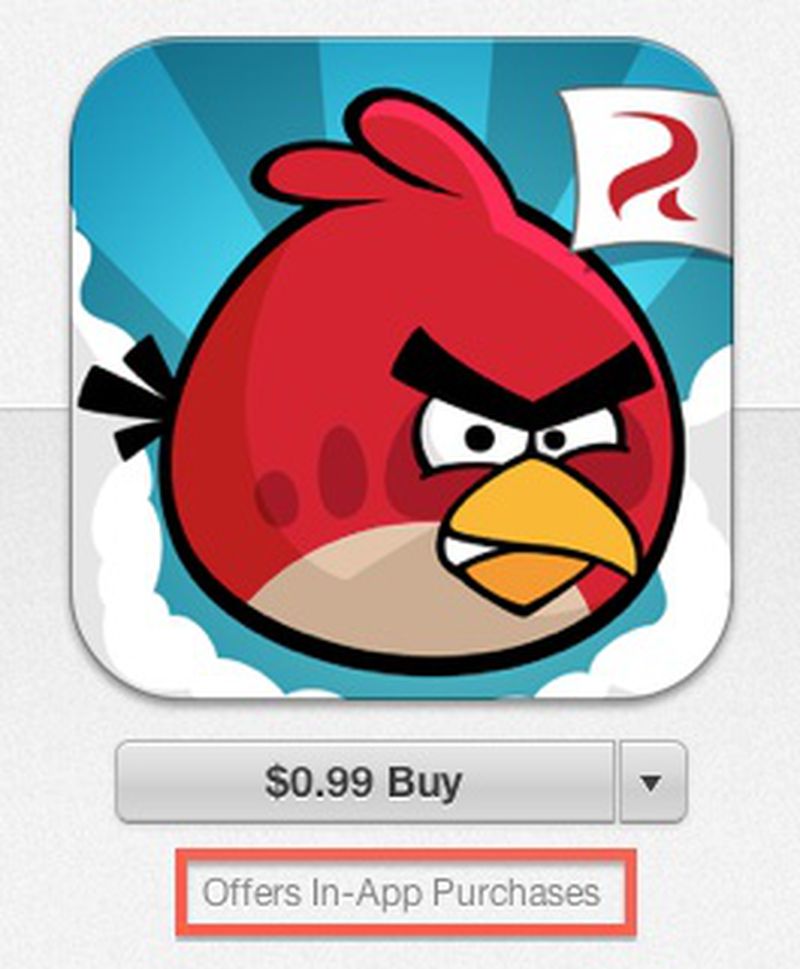 As noted by The Guardian, Apple today rolled out a new "Offers In-App Purchases" disclosure directly underneath the Buy/Free button for App Store apps supporting the feature. The addition helps make clear to potential purchasers that free or even paid apps may require additional purchases in order to unlock the apps' full functionality or for other benefits such as acquiring in-game currency.

The new tagline is currently only appearing in the desktop version of the App Store that sits within iTunes. For now, it's not shown in the iOS App Store app, nor does it appear on webpages for iOS apps.

Apple confirmed to The Guardian that the message is a new addition to the App Store. Its location – directly below the icon and "Free" button on each app's page – makes it even easier for people to identify that an app uses in-app purchases (IAP) before downloading it.

Apple just recently settled a lawsuit over the issue of children being able to make unauthorized in-app purchases sometimes totaling as much as thousands of dollars. With today's move, Apple is clearly attempting to make it even more clear to users before they download or purchase an app whether it includes In-App Purchase content.

The report notes that Apple could easily use the new disclosure to deploy a filter that would allow parents to restrict their children's downloads to only free apps with no In-App Purchase content, but the company has not yet taken that step.

Update: The notifications are now on the iOS App Store as well.

...or it should say "You should play with your kids instead".


Yes because all parents do is play with their kids, they never need the kids to be quiet for half an hour while you cook dinner etc.
Rating: 21 Votes

This is designed for stupid / ignorant / lawsuit happy people.


This comment is designed for people with a false sense of superiority.
Rating: 14 Votes

komodrone
...or it should say "You should play with your kids instead".
Rating: 14 Votes

Adokimus
Already a bunch of naysayers (pretty standard for any apple news), but I think this is great. I'm not worried about making accidental purchases, but I like having a quick way to know if I'm buying an entire app or if they are going to nickel and dime me for "add ons" or anything else. It's commendable to be creating more informed consumers.
Rating: 12 Votes

Forgive my ignorance, but if you make an in-app purchase, doesn't it require your password? :confused:


Yes. Of course, some people _are_ stupid and give their kids a password and the kids know the credit card. More problematic, once you enter the password (to download a free app), it keeps working for 15 minutes. Which is excellent if you are looking for a dozen songs to download and don't have to enter your password each time, but bad if your kids can buy super power berries for $100 in a game.

An improvement to the password "15 minute" rule would be to allow no purchases more expensive than the original one. So: Free game -> no paid purchases. 99cent game -> no purchases over 99cent. That would stop the worst cases, but you can still download a dozen songs within fifteen minutes.
Rating: 7 Votes

slicecom
I'd like to see "Free" apps with in app purchases in a completely separate category from apps that are actually free/ad supported.
Rating: 7 Votes

Unggoy Murderer
If only they could add common sense so easily.
Rating: 7 Votes

Shrink
I was waiting to see how long it would take for someone to crab about this seemingly simple and reasonable little addition, which does no harm to anyone, and adds no restrictions at all to the Buyers "freedom".

I guess for some, life is not fun if you can't complain...
Rating: 6 Votes

nagromme
I think it's a shame that race-to-the-bottom prices for terrific creative work, coupled with shameless and greedy abuse of IAP by some developers, has given a bad name to what can be the best system for all:

- If you want to buy, you don't need to download a second app! Nor lose your progress. Just upgrade.

- Developer only has one app to maintain.

- Even with a paid game, IAP is a great and fair way to compensate developers for adding level packs or further content.

I despise consumable IAP (and also pay-to-win), but one-time purchases of things that have real value and took talent to make? Like full games and major add-on content? Things we've always paid for even before iOS existed? For them it just seems like a convenient option: do it in-app instead of buying a second app. But a game that uses this convenience will be stigmatized by people not paying attention and saying "all IAP is bad."

And even some games with consumable IAP are great fun: they're balanced so that you don't need the consumables. Jetpack Joyride etc. (Nor do I necessarily always object to a subscription model for a game: it does give me pause, but I realize that some games have ongoing server and moderation costs.)

(As for kids, the only way to truly stop parents from handing their credit card to kids is to not let adults buy anything either! Mistakes will always be made.)


Better to also show average $ people spend on in-app purchases, to see how much those "free" apps REALLY cost.


I like that idea. Make some distinction between a crazy IAP money-grab and simply using IAP as a convenient way to foster conventional and optional transactions.
Rating: 5 Votes

Yes because all parents do is play with their kids, they never need the kids to be quiet for half an hour while you cook dinner etc.

I'm guessing most vocal "bad parenting" pricks are either barren or have a stay-at-home wife that does all the work for little recognition... (Gross generalization, I admit!)

I'm a single father and and coming back from work/school means cooking a good healthy dinner, so it is TV time until it is ready.

Of course, I could microwave something unhealthy then maybe I'd be considered a good parent...

Anyways, app store password restriction is set to "immediately", as well as disabled app deletion... For when I'm being a bad parent while driving 2 hours to some relatives...
Rating: 4 Votes