Apple has been named the most valuable billion-dollar company in the United States by brand identity firm Brand Finance, reports the Silicon Valley Business Journal. 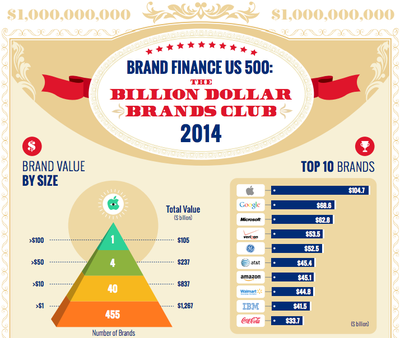 The standing was revealed in a new rankings report done by the firm which listed the top 50 billion-dollar brand names in the U.S., as Apple's $104.6 billion valuation was ahead of other technology companies including Google, Microsoft and Verizon which were valued at $68.6 billion, $62.8 billion, and $53.5 billion, respectively.

Throughout the past year, a number of other sources have also regarded Apple to be among the world's most valuable companies, with brand identity firm Interbrand putting the company's value above Coca-Cola and American business magazine Forbes heralding Apple as the world's "Most Admired Company" ahead of Amazon.

Don't forget though, they're "haunted."

In before "Apple is doomed!"

I don't see Samsung or HTC on there though...
Is HTC even a billion dollar company...?

Kane your a looser!
Doomed not!
WSJ needs to fire who ever hired her!

Except this "accolade" is due to success of current products, all conceptually birthed in the Jobs era. "Haunted," which I personally think is premature and based on thin air, discusses its future. There is no logical connection between the two. Cook still has to prove himself as a successor to Jobs, not a clone of Scully, Spindler, or Amelio. I don't take too much import to this "award" as its a reflection of Apple's past success, not a predictor of its future.
Score: 9 Votes (Like | Disagree)

lolkthxbai
In before "Apple is doomed!"

I don't see Samsung or HTC on there though...
Is HTC even a billion dollar company...?
Score: 5 Votes (Like | Disagree)

MattG
Don't forget though, they're "haunted."
Score: 5 Votes (Like | Disagree)

You know Apple and Google are the only reason AT&T and Verizon are on that list at all.


My guess is people would still be using cell phones even if Apple didn't exist.
Score: 4 Votes (Like | Disagree)

Found an old one in a drawer and was reminded of where we were before the iPhone showed up.

your example of what came before doesn't prove anythign you say.

You cannot speculate what WOULD have happened compared to what did happen. Apple shocked us by releasing something that most people weren't really expecting yet. (There were companies working towards this overall trend, but nobody really expected aApple to do it).

You have no clue. I have no clue. Saying "well, the treo was ******, so therefore everything else they made in the future would have been ****** too" is a logical fallacy.

TYhe only statement you can say is "at the time, The devices were comparitavely crappy in my opinion to what apple brought"

that is the only true statement.

however, we are free to speculate all we want. thats why human beings evolved an imagination.

I'm going to play the speculation game now too, cause im tired and my imagination is runnign wild:

Apple never releases the iPhone. Tech companies realize that the Cell phone is a dying tech and is only a middleware to the gaining of knowledge. the fastest way is direct brain communication with the internet. Tech companies decide instead of being Profit motivated first, they dump all their R&D into implants and instantaneous data request directly from the cerebral cortex. Mankind advances at staggering new paces and within 30 years man is on the moon setting up colonies. All of this was able to happen because Apple's iPhone didnt prove to tech companies that you could make billions on cell phones, so they diversified and invested elsewhere.
Score: 3 Votes (Like | Disagree)
Read All Comments