After debuting a range of playful iPhone 5c ads on Tumblr in early March, Apple has expanded its campaign to the The New York Times and the front page of Yahoo.com. The Yahoo homepage currently features an ad block on the right side hand of the page that houses eight different iPhone 5c ads with the tagline "Find your colors."

Each ad features a short animation, mirroring some of the original Tumblr ads. There's a spot called "Catwalk," for example, which features a series of lens flashes, "Baaaa," which mimics a herd of sheep, and "99 Luftballoons," which offers floating red dots with music from the popular song. 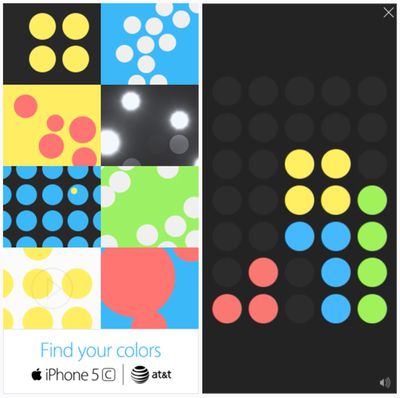 In each video, a series of dots are depicted in different arrangements that eventually come into line as the same dots on the back of the iPhone 5c case, which then zoom out to show the full iPhone 5c. Apple has approximately 17 different animated iPhone 5c ads that are being displayed on the web, both on Yahoo's properties and on The New York Times site earlier this week.

According to a Times representative, Apple's grid-based ad was a customized format offering "a transparent overlay to depict a rich brand experience" that was indeed designed by the company though it featured a Sprint logo.

Apple has aggressively advertised the iPhone 5c since its release, but the move to social media sites like Tumblr is new territory for the company, which typically sticks to billboards, television commercials, and other types of traditional advertising formats. Web ads are not new for the company, however, as Apple has recently shown its Your Verse ads on a range of websites.

It appears that the campaign on the Times website may have ended, but it is likely that Apple will expand the animated advertisements to other websites as well in an effort to further market the iPhone 5c to a wide range of consumers.

During the company's Q1 2014 earnings call, Apple revealed it had seen lower than expected sales of the iPhone 5c due to high demand for the flagship iPhone 5s. Some reports indicated that the iPhone 5s was outselling the iPhone 5c by a two-to-one margin and Apple scaled back production of the mid-tier phone shortly after launch.

iSayuSay
They forget the "hon" part in the video

Oh yeah it's so essential :rolleyes:

Exponent
There's a big problem with "Find Your Colors"
and that is that none of the colors Apple / Jony picked are anything close to the colors I like, at all.

Here's my counterproposal for colors I came up with a few months ago:

Come out with these, and the phones will sell themselves. I'd pick up a blue one, personally.
Score: 12 Votes (Like | Disagree)

But I thought the iPhone 5c was going to sell well!

Lol I called it

iPhone 5c was a mistake

The 5C is the second best seller on 2/4 of the major US carriers behind the 5S. On the other two it's third behind the GS4.

The 5C is selling just fine. If they didn't see any benefit to the added marketing they wouldn't do it.
Score: 10 Votes (Like | Disagree)

The 5C is a nice phone - but a shoddy price point.

Sirious
I don't get it
Score: 7 Votes (Like | Disagree)

iCore24
I play them all on yahoo every time I see them. I like it.
Score: 6 Votes (Like | Disagree)
Read All Comments