Monday February 10, 2014 4:54 am PST by Richard Padilla
To commemorate the 50th anniversary of The Beatles' American debut, Apple today has expanded the lineup for its Apple TV set-top box by adding a channel dedicated to the legendary rock group. 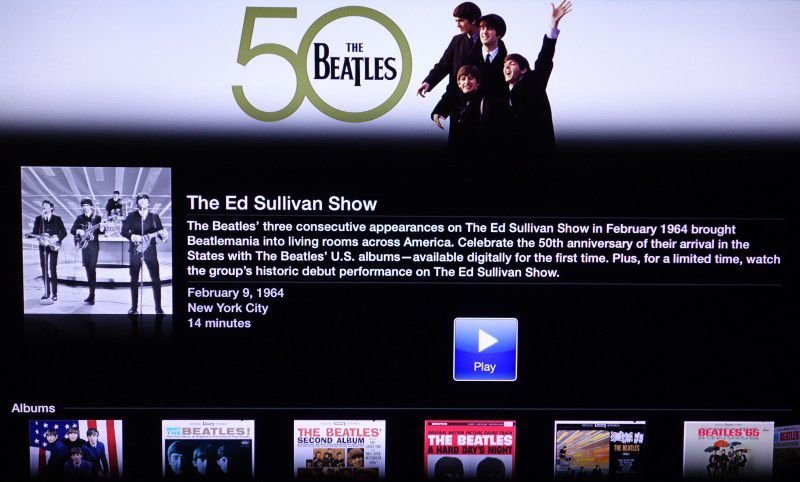 The channel allows users to view The Beatles' groundbreaking performance on "The Ed Sullivan Show" for a limited time, and also offers download links to The Beatles' U.S. releases, which are available digitally for the first time on iTunes.

The Beatles' music originally debuted on iTunes in November 2010 after years of speculation and prolonged negotiation between record label EMI and Apple. The group's music went on to sell 2 million songs and 450,000 albums in its first week on the iTunes Store, and eventually reached overall sales of 5 million songs and 1 million albums within in two months. Exclusive ringtones by The Beatles were made available on iTunes in February 2012, and a digital compilation of 59 rare and unheard recordings by the group also launched last December.

bushido
there needs to be a new UI! so cluttered.


Are you bragging or very young?
Rating: 7 Votes


You must be really fun at parties.
Rating: 3 Votes

Jsameds
Conspiracy Theory: Apple is cluttering up your existing AppleTV so you'll want to buy the new one with a clean interface when they come out.
Rating: 3 Votes

nep61
I saw that channel on AppleTV this morning... HAD to watch. Really great to see the Greatest Band EVER getting their first exposure here in the US.
There was nothing like it at the time... (Elvis' appearance is a close 2nd)... and there will never be anything like it again.

The world has gotten smaller with all advances in technology in the last 5 decades since the BEATLES stepped foot on US soil... Any new Band or performer can be immediately exposed to the world in an instant... it can never be like it was in 1964.

Their music has stood the test of time, and will probably continue to do so for many many years to come.
Rating: 3 Votes

You might not personally like their music and there's nothing wrong with that, but to call them below average or average is idiotic.


Calling people idiotic for having different taste from you is idiotic.
Rating: 2 Votes

mazz0
I really don't like this system of pushing out content to everybody, regardless of whether they want it or not. Content and the OS shouldn't come in through the same upgrade mechanism (ie I should be able to keep my OS up to date without cluttering the interface with stuff I don't have any use for). It's bad enough with the unwanted iPhone apps, it's even worse with Apple TV.
Rating: 2 Votes