The City of San Francisco today approved Apple's plans to build a new retail store in the city's famous Union Square, taking over the former Levi's building at the corner of Post and Stockton streets.

According to an Apple representative presenting the company's plans to the city's planning commission, the flagship store will be "more iconic" than the well-known Fifth Avenue glass cube retail store in New York City, reported ifoAppleStore's Gary Allen after attending the meeting.

A model of the San Francisco Apple Store presented at the meeting (Courtesy of ifoAppleStore)
Renderings of the location shared earlier this week depict the new store with two massive 44-foot tall sliding glass panels that allow the building to be exposed to the street.

Apple originally filed plans to move its existing Stockton Street store to the prime Post Street location back in May of 2013, but the company was forced to revise its initial building plans after critics objected to the removal of the historical Ruth Asawa fountain and the installation of an 80-foot wide wall along a key pedestrian and transit corridor.

Revised plans for the site were filed in August, and Apple pledged to move the fountain to a nearby location, add an eight-foot wide window, and move the glass wall of the store back by four feet.

The commission has now accepted Apple's second proposal with one small caveat -- the company will need to offer improved accessibility options for the store's upper floor. Earlier today, the San Francisco Historic Preservation Commission also approved a permit for the project, giving Apple a green light to move on with the store's construction. 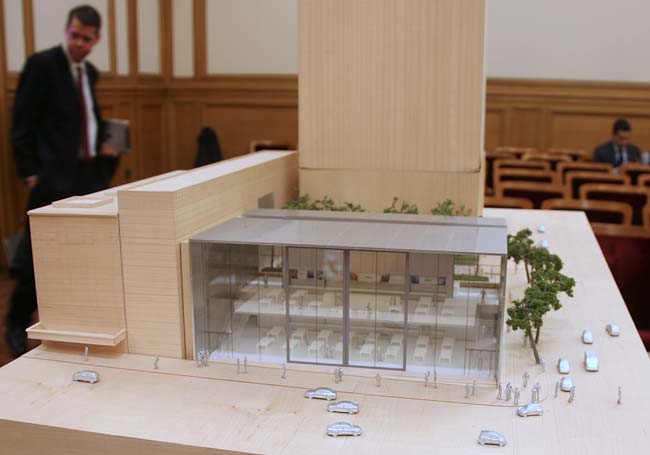 What is this? An Apple store for ants?!
Score: 6 Votes (Like | Disagree)

AngerDanger
Time to train birds to swoop in and steal iPods!

The real victory is they saved the fountain, and all the anti-art naysayers on this board lost: Apple made room for it.


You mean this piece of crap?

Some things deserve to be torn down.
Score: 2 Votes (Like | Disagree)

Macist
Apple are now 100% wedded to pure modernism, with its emphasis on minimalist function. This is a glass box they've boxed themselves into.

The trouble is when you arrive at pure minimalism there's nowhere else to go as any design choice that runs counter can be dismissed as trite ornamentation. On the other hand, designs that echo the organic structures of the natural world, perhaps to provide better ergonomics or some other useful function, may be dismissed as being too jarring aesthetically.
Score: 2 Votes (Like | Disagree)

DeeGee48
Better Do It Now!

Jony Ive should design traffic bollards for the front of that place. I can see already that some idiot will one day want to ram his car through those doors!
Score: 2 Votes (Like | Disagree)
Read All Comments

Tuesday January 26, 2021 6:14 am PST by Joe Rossignol
Apple today announced that it will be celebrating Black History Month with curated content that highlights and amplifies Black creators, artists, developers, and businesses across the App Store, Apple Music, the Apple TV app, Apple Books, Apple Podcasts, and more. The content will be featured throughout the month of February. Black Unity Sport Band has "Truth. Power. Solidarity." ...
Read Full Article • 150 comments