Back in May, officials in San Francisco proudly touted a plan by Apple to move its existing Stockton Street flagship store three blocks north, giving the store a larger footprint and a prime location in the Union Square shopping district. 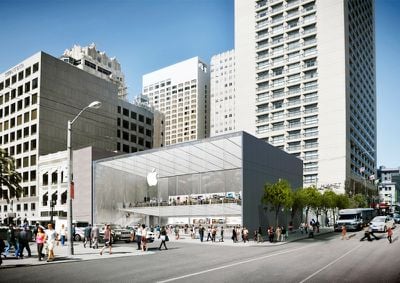 Apple's original design for new San Francisco flagship store
Apple's plans quickly ran into resistance, however, with critics panning Apple's proposal to remove a sculptural fountain along Stockton Street and the design's 80-foot-long windowless wall along a key pedestrian and transit corridor on Stockton. As the project proceeded through the city's planning process, officials made clear that significant changes would be needed for the project if it was to receive approval.

As noted by the San Francisco Chronicle, Apple has now filed revised plans for the store, addressing the major criticisms of the project. Among the most prominent changes is a move to retain the fountain by noted sculpture artist Ruth Asawa, who died earlier this month. The fountain will be moved slightly, but will remain close to its current location.

Ruth Asawa's "San Francisco Fountain" that Apple has now proposed keeping on the site
Another change for the project involves the addition of an eight-foot wide window along the Stockton Street frontage, extending from the sidewalk to the roof to break up the massing and provide visual interest for those passing by. The window will also continue across the roof of the store to create a skylight.

"We've been working with the city of San Francisco as they review our ideas for an Apple Store on Union Square," Apple spokeswoman Amy Bessette said Monday. "Our latest design includes a store with more natural light and a plaza on Stockton Street that includes the fountain by Ruth Asawa, just a few feet away from its current location."

A third change addresses planners' concerns about a monotonous glass wall along the main Post Street frontage, with Apple now proposing to pull the glass wall back by four feet from the metal frame of the building, offering a greater sense of depth and more shadows for visual interest.

City officials quoted in the story seem pleased by Apple's proposed changes, although the project must still pass through full review before it can be approved. Apple has not announced when it plans to open the new store, and any internal targets may yet be affected San Francisco's frequently unpredictable review and permitting processes.

Update: Renderings of the revised plan showing the fountain, vertical window along Stockton Street side, and recessed glass on Post Street frontage.

kkat69
I'm all for art, but I've seen that thing in person, and Apple would do everyone a favor by bulldozing it.

I don't think it's all that but hey that's art, it's all opinionated.
Score: 28 Votes (Like | Disagree)

paul4339
Just my personal opinion, but I was hoping they would get rid of it .... and maybe replace with a giant black MacPro with a fountain in the middle.
:)

I'm all for art, but I've seen that thing in person, and Apple would do everyone a favor by bulldozing it.

I don't think it's all that but hey that's art, it's all opinionated.


I'm all for preserving history and all that, but that is one ugly fountain.
Score: 19 Votes (Like | Disagree)

I'm all for art, but I've seen that thing in person, and Apple would do everyone a favor by bulldozing it.

I don't think it's all that but hey that's art, it's all opinionated.


Seriously, that thing was ugly. And that's not an exaggeration like the hate for iOS 7 icons.
Score: 17 Votes (Like | Disagree)

arctic
That fountain will also come in gold.
Score: 10 Votes (Like | Disagree)

mrxak
Wow. All this time, since the story first showed up on MacRumors, I was imagining a nice fountain. I figured maybe it was an average, ordinary fountain, at the worst. But that is one ugly fountain. In fact, the worst I have ever seen.

It's hard to screw up a fountain, that's the mistake I made in my thinking.