Apple Widens Lead Over Samsung in U.S. Smartphone Race in 2013

Research firm NPD today announced the results of its latest Connected Home Report, showing that Apple increased its share of the U.S. smartphone installed user base by seven percentage points, from 35 percent in the fourth quarter of 2012 to 42 percent in the same quarter of 2013. Second-place Samsung increased its share of the market by a smaller margin from 22 percent to 26 percent, while other major manufacturers saw their shares drop. 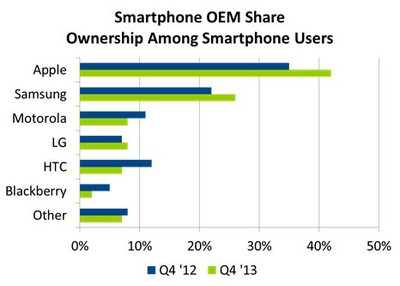 NPD's data, which is based on a survey of roughly 5,000 consumers, is in close alignment with recent data from comScore that showed Apple with 41.2 percent of the market and Samsung at 26.0 percent in the September-November period.

Both firms track installed user base rather than sales, offering a more realistic picture of real-world usage but which is slower to react to shifting market trends given typical handset lifespans. Apple has shown steady increases under these studies over the past several years, even as Android has experienced significant growth. One recent study of trends by Asymco's Horace Dediu has predicted that Apple's share of installed user base in the U.S. will peak at 68 percent in 2017 when the smartphone market hits a saturation point at 90 percent of the country's population.

While Apple's performance remains strong in the U.S. and several other countries, Android has had more success attracting customers in many other markets around the world. Data from Kantar Worldpanel for the August-October period pegged Apple's share of the market in many European countries and China in the 15-20 percent range, with iOS barely registering in some countries such as Spain.

Tech Media Reaction: Oh my god Apple is dead within the year!
Score: 22 Votes (Like | Disagree)

Samsung Widens Lead Over Apple in US Washer/Dryer Race in 2013 :apple:
Score: 16 Votes (Like | Disagree)

Admittedly, there are many of us who prefer a bigger screen size (though I support having the current size option as well). It seems that Apple will follow the iPad naming pattern with the iPhone and release a iPhone Mini (current 4 inch iPhone with a smaller footprint) and an iPhone Air (5 inch iPhone thats only a tad bigger than the current iPhone 5S). If they do RIP (high end) Android.


I love these absurd, baseless claims that if Apple does XYZ, then people will just absolutely abandon Android like a sinking ship.

Does anyone on this site realize there are LOTS of people in the world who can afford and have either Android or iPhone and CHOOSE Android?
Score: 14 Votes (Like | Disagree)

PollyK
But.... But... 3.5 inch screen is the perfect size. Why do the blind loyalist now want a 4+ inch screen. The loyalist said a 4 inch screen couldn't be used with one hand. But on the iPhone it's possible. They said 4.3 inches was too big too, now they say 4.7 inch is the sweet spot. Why does the loyalist's goal posts keep moving?
They said a cheaper iPhone will kill Android, but somehow it didn't work out that way. They all laughed at the bigger screens, but now they follow Samsung who has made bigger screens and smaller bezels since the beginning.
Score: 13 Votes (Like | Disagree)

cymerc
But.. but.. but... Android is winning!
Score: 12 Votes (Like | Disagree)
Read All Comments

Sunday May 9, 2021 2:00 am PDT by Sami Fathi
Zoom, a hallmark platform used by millions during the global health crisis, has been given access to a special iPadOS API that allows the app to use the iPad camera while the app is in use in Split View multitasking mode. This case of special treatment was first brought to attention by app developer Jeremy Provost, who, in a blog post, explains that Zoom uses a special API that allows the...
Read Full Article • 323 comments