Apple has posted three new job listings for the data center the company is constructing in Prineville, Oregon. Apple is seeking two Data Center Maintenance Technicians, along with a Data Center Chief Engineer, a position the company has been trying to fill since early 2013.

While the chief engineer would be responsible for overseeing, testing, and monitoring the data center, as well as implementing new projects, the maintenance technicians would identify and repair potential issues quickly.

Apple has been hiring for the 338,000 square-foot Prineville data center since shortly after construction began in October of 2012, and has maintained a temporary modular data center on the site to house employees. With the new hirings, as well as rumors of a solar farm coming to the site, it appears the Prineville data center may be growing closer to completion. 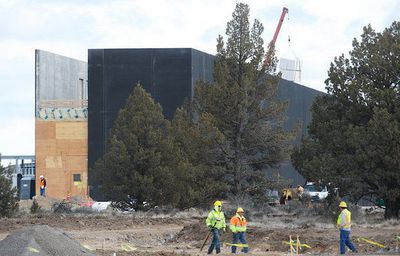 Apple's Prineville data center under construction in February 2013 (Randy L. Rasmussen/The Oregonian)
According to a recent statement by Prineville mayor Betty Rope, Apple is planning to add a solar farm to the Oregon data center, just as it has done in North Carolina.

Mayor Betty Roppe says those agreements were with Apple. She says the company's enterprise zone agreement defers taxes on improvements to the land for a period of 15 years.

"My understanding is that they will create the solar farm and then they will sell that back to the companies that they actually get their electricity from," said Roppe.

Apple has committed to running all of its data centers with 100% renewable green energy, an initiative that it embraced for its massive Maiden, North Carolina data center. In Maiden, Apple has two operational solar farms, providing 42 million kWh of clean, renewable energy.

According to Apple's environmental site, the Oregon data center is designed to be as environmentally responsible as the site in North Carolina, though at the current time, the Oregon data center is much smaller in scale. While Apple has not specifically outlined plans to install a solar farm in Oregon, it has pledged to purchase renewable energy directly from two local utilities and other local renewable energy generation providers.

Back in September, Apple did look into purchasing an additional 96 acres of land near the Prineville, Oregon site, which could be the home of a future solar farm.

In North Carolina, Apple's massive solar farms generate approximately 40MW along with another 10MW from fuel cells, and at times of peak energy, Apple produces power for Duke Energy, the local utility company. The NC solar farm consists of more than 50,000 panels on 100 acres of land and will likely serve as a blueprint for solar farms in other areas.

I agree. This is like taking a photo of a hydroelectric damn after it freezes over.


Having lived in the Pacific Northwest, that's how most days are. Fortunately, solar energy is not just visible light. Plenty of solar power still makes it past the clouds.
Score: 4 Votes (Like | Disagree)

Santabean2000
It's good to see Apple is not just paying lip service to its energy requirements.

Would have been a big +1 if Katie Fehrenbacher had snapped that photo on a sunny day.

Here, this is just for you, Katie. Next time, do you own freaking job! :mad: 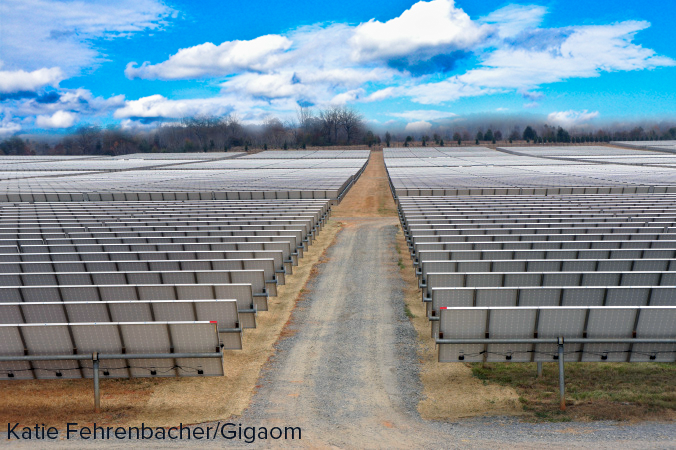 MacLC
Would have been a big +1 if Katie Fehrenbacher had snapped that photo on a sunny day.
Score: 3 Votes (Like | Disagree)

Why are those solar panels over grass? Can you imagine how difficult it's going to be (even with industrial equipment) to service the land around that equipment?

The North Carolina facility pictured uses sheep to graze on the grass.
Score: 1 Votes (Like | Disagree)

mrtravel123
It's not all about how much SUN is present. It's about the outdoor temperature where the data center is located. Being located in the scorching desert of New Mexico would require LOTS more energy to the hundreds (if not thousands) of data computers running at the ideal temperature. From what I hear, that part of Oregon is a good balance for maintaining a good indoor temperature at little energy cost.

That part of Oregon is also near the "energy grid" lines... from what I've heard.

As well, if necessary, the energy costs there are lower than in many parts of the US. If energy is needed, it is cheaper there.

Lets not forget about tax credits too.
Score: 1 Votes (Like | Disagree)
Read All Comments