The Charlotte Observer reports that Apple has begun work on a solar farm adjacent to its massive new data center in Maiden, North Carolina. The new solar farm will likely generate a significant amount of power for the facility, although Catawba County officials have yet to see building plans for the facilities.

Apple has quietly begun work on a solar farm that apparently could help power its sprawling data center in southern Catawba County.

Permits issued by Catawba County show that the Cupertino, Calif., company has been approved to reshape the slope of some of the 171 acres of vacant land it owns on Startown Road, opposite the data center, in preparation of building a solar farm.

Permits issued so far only address grading and erosion control on the site, but Apple has disclosed in those permit applications that it intends to build a solar farm on the site.

The Hickory Daily Record adds some detail to the situation, noting the plot of land is indeed across the street from the data center and that nearby residents have been upset by the smoke from fires set to help clear the land.

Across the street, at 6028 Startown Road, Apple has filed a soil erosion permit with Catawba County for about 170 acres of land. Apple applied for the permit on Aug. 9, and the county reviewed and approved it on Aug. 10.

In the application, Apple described the work as “Solar panel farm A” for the 170.99 acres of land. 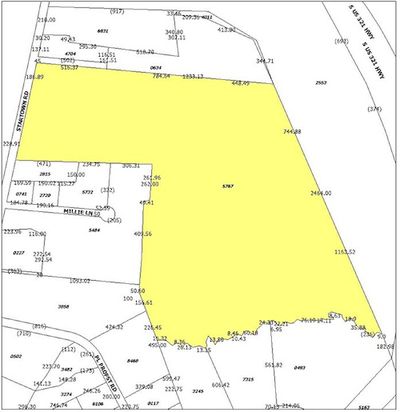 Apple's initial 70-acre purchase at solar farm site of 6028 Startown Road in Maiden, NC
The erosion control permit (PDF) indicates that Apple has pieced together three separate parcels of land for the solar farm, with the most recent addition coming just last week. An initial 70-acre parcel at the project address was identified as having been bought by Apple last October, but it is unclear what constitutes the remaining 100 acres of the project site.
[ 271 comments ]

Waste of time and land...


Yes, harnessing free power from the sun is such a waste of time.
Score: 42 Votes (Like | Disagree)

Inefficiently harnessing power from the sun at a premium infrastructure cost, yeah waste of time and money and real estate.

Waste of money? You are talking about a company that has billions of cash to spend and builds spaceship buildings and stores made completely out of glass and not just regular glass but ultra-expensive panels that have to be specially made.

Are you complaining that they could be using just regular bricks for those too because it would save them all that money they could have just sitting around doing nothing?

I would rather see the land being used as a cutting-edge solar farm than another Walmart or landfill. Especially when it's another project that is defining NC as a technology hub and a place that looks to the future instead of being stuck in the past and hoping things might go back to the industries of old.
Score: 29 Votes (Like | Disagree)

marcusj0015
This make me SO happy.

why don't they put solar panels and wind mills on top of the data center itself, aswell?
Score: 22 Votes (Like | Disagree)

Peace
Why all the hate ? There are solar farms all over Europe. And parts of America.
Score: 13 Votes (Like | Disagree)

Unless Apple has reinvented solar power... ?

Last I knew, solar power was incredibly inefficient... so I'm going to second you on saying it's a waste.


Apple hasn't reinvented solar power, but plenty of other companies have.

Both photovoltaic and solar-thermal power-plant scale farms are already viable, and with the projected increasing costs of energy, they're looking like a better bet every day.

Aside from the large up-front costs, (which a company like Apple has no problem covering), there really aren't any drawbacks.
Score: 11 Votes (Like | Disagree)
Read All Comments